Tyronn Lue on Jayson Tatum: "He reminds me a lot of Paul Pierce" 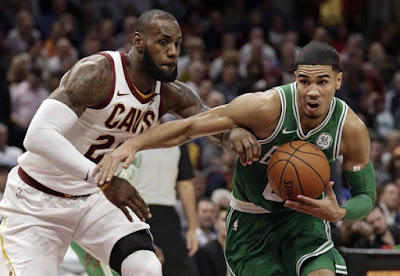 The Celtics are back in the Eastern Conferance Finals for the second straight year, as they closed out "The Process" in the Philadelphia 76ers in five games on Wednesday night.

Boston will face LeBron James and the Cleveland Cavaliers on a third occasion in the playoffs over the past four seasons (second in the ECF), but this time around there's one particular rookie everyone has their eye on and his name is Jayson Tatum.

After practice on Thursday, Lue opened up about a relationship with Tatum that dates back a long ways.


"He’s like my little cousin,” Lue said of Tatum. "His dad, Justin Tatum, is best friends with Larry Hughes and they come down all the time. He’s a part of my extended family, Justin is. They come to Mexico, Missouri (Lue’s hometown) all the time and just seeing little Jay when he was six, seven years old now to who he is today is crazy."

"Seeing the player he’s become – we knew he was gonna be good, but now he’s at a whole new level. Just seeing him coming to Mexico and just coming to my barbecues and all that stuff. Now he’s an NBA player and playing at a high level. It’s just good to see."

Lue revealed to reporters how he believed Tatum had professional basketball in his future around the age of 14 or 15 years old.


"He’s not scared," Lue said. "He’s not afraid. He’s always been a type of kid that—he wants these type of moments. He’s taken advantage of it I think with Kyrie [Irving] and Gordon [Hayward] going down and him having a chance to play the minutes he’s been playing—starting and playing in the playoffs the way he has—he’s taking full advantage of it.

"He’s never been scared, never been afraid of the big moment. You can see that."

Tatum has become the only rookie in NBA history to score 20 or more points in seven straight playoff games and the youngest to hit 200 points during this postseason run. Lue actually compared the rook to another Celtics legend and future Hall-of-Famer.


"He reminds me a lot of Paul Pierce when Paul first came out. Just being able to get to the free throw line, great footwork, never gets sped up offensively. He’s a really good player."

Despite the praise, Lue admits that it won't be easy game planning against his little cousin when the Celtics take on the Cavaliers beginning this weekend.


"It’s tough because you want to see him do well, but not against you," Lue said. "We just gotta try to take him, be physical with him, not let him get easy baskets. He’s gonna score because he can post, he can put it on the floor, but we gotta just try to take away his easy baskets as much as possible."

Tatum and the Celtics will look to stop LeBron James from making it to his eighth consecutive NBA Finals, as Game 1 tips-off Mother's Day at 3:30 p.m. EST on ABC