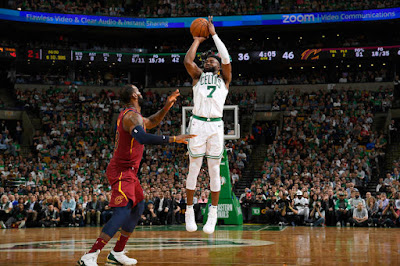 Not even a monster triple-double from the best player in the series could deter the relentless Celtics in Game 2.

After turning in an abysmal performance Sunday, LeBron James bounced back with 42 points, 12 assists and 10 rebounds Tuesday night, but it wasn't enough. The Celtics responded with a strong second half -- where they strung together defensive stops down the stretch to close out a 107-94 win. They now lead the Eastern Conference Finals, 2-0.

James topped his 15-point performance in the opening minutes. His 21 first-quarter points pushed the Cavs to an early lead but the Celtics weren't far behind.

Jaylen Brown got off to another quick start with 14 points to lead the Celtics as they trailed the Cavs, 27-21 heading into the second quarter. Cavs kept the C's at bay before halftime -- where they took a an eight-point lead (55-48).

Then came the Celtics in the second half. Terry Rozier caught fire, scoring 11 points in seven minutes. Morris poured in six, including a three-point play on over Tristian Thompson -- when Morris got demonstrative and in Thompson's face -- that ticked off the Cavalier forward so much that the two had to be separated.

The exchange fueled Morris' teammates along with the Celtics fans at TD Garden. The momentum shifted in favor of the Celtics before Rozier drained a 3-pointer from the corner -- which gave Boston a seven-point lead (84-77) before the start of the final frame.

James reverted back to takeover mode, only this time he got his teammates involved. He started things off by completing a 3-point play, he then found a cutting Jeff Green for an easy-two and followed that up with an ally-op to Kevin Love. Still, the Celtics clung onto their double-digit lead -- 95-84 -- with 5:23 left to play.

Plenty of time for LeBron to torch the C's for five straight points as he reached the 40-point plateau with 4:41 left in a two-possession game (95-89). But when J.R. Smith shoved Horford mid-air -- which led to Marcus Smart getting into his face -- it led to a four-point swing.

Kevin Love finished with 22 points and Kyle Korver chipped in 11 points from the second unit.

But then the momentum took a drastic turn. Smith's flagrant foul gave the Celtics two points and with possession, Horford's jumper stretched Boston's lead back up to 10. The C's got it up to 14 with less than two minutes left in the game and that's when coach Lue pulled his starters and Stevens did the same.

Brown's 23 points to go with his 7 boards led six Celtics players in double figures, Rozier added 18 and Horford reached a double-double (15 points, 10 rebounds). Morris chipped in a dozen while Tatum and Smart each finished with 11 points.

The series will take a four-day hiatus before heading to Cleveland for Game 3 Saturday night.

Celtics finished with 50 points in the paint and forced 15 Cavaliers turnovers.