Tyronn Lue gets testy with reporter after Game 5 loss 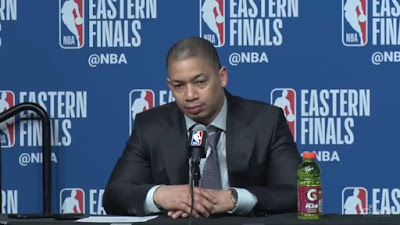 Note to self: Don't ask Ty Lue if he heads into a game not knowing which guys not named LeBron James are going to show up night in and night out -- he doesn't appreciate being put on the hot seat or in other words, stating the obvious.

Despite the fact that the Cavaliers head coach has struggled to find consistent production from James' supporting cast throughout the Eastern Conference Finals, Lue didn't appreciate it when a Cleveland reporter asked him if he knows what to expect from the other guys. Even though it's been a constant story line throughout postseason, specifically throughout the series.

One night it's J.R. Smith, another night it's Kyle Korver picking up the scoring load in Games 3 and 4, respectively, but Wednesday night the two sharp shooters combined for nine points on 3-of-12 attempts.

At this point in the series, it's not a terrible question to ask a coach on the brink of elimination.


"Do you know what you're going to get from this team night-to-night or is it throwing a dart? asked the reporter.

"What kind of question is that, man?" Lue replied after a brief chuckle.

"Because you guys played really well at home, you won [Games] 3 and 4 -- you just said it -- so do you know what to expect from this team?"

Interestingly enough, Lue conveniently didn't mention guys he can consistently rely on because there aren't any. Night in and night out it's hard to predict what he will see from his guys and heading into Game 6, the Cavs hope home cooking will once again stretch the series to a winner-takes-all Game 7 Sunday night at TD Garden.

Otherwise, the Cavs season will come to an end in what will be remembered as one of the most improbable defeats in recent Eastern Conference playoff history.