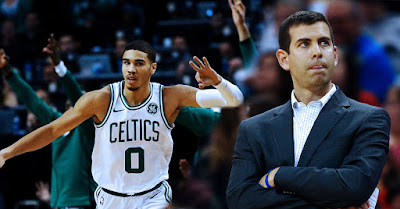 Brad Stevens and Jayson Tatum were named finalists on Wednesday in this year's NBA Awards.

Stevens is one of three nominated for Coach of the Year, along with recently fired Dwane Casey, formerly of the Toronto Raptors and Utah's Quin Snyder. Tatum joins second-year Ben Simmons, who sat out during the 2016-17 campaign with an injury and Jazz guard Donavan Mitchell as Rookie of the Year finalists.


The three finalists for NBA Coach of the Year... Dwane Casey, Quin Snyder and Brad Stevens!


Stevens led the Celtics to a 55-win season and to the No. 2 seed in the East without Gordon Hayward (ankle), who has been out since the first five minutes of the season and Kyrie Irving since mid-March. Though a regular season award and votes have already been all counted, you can't help but be impressed with how Stevens has Boston just two wins away from the NBA Finals.

Tatum picked up the ball following the injury to Hayward and ran with it, as the 20-year-old (who was just a teenager for more than half of the season) finished the year averaging 14 points per game, while shooting 43.3-percent from behind the arc.

Tatum currently leads the Celtics in playoff scoring at 18.1 points and shows no signs of slowing down as the playoffs continue for the rook.