A look at the Celtics' upcoming offseason schedule 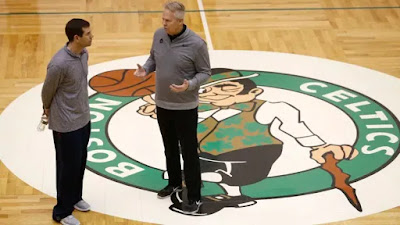 The Celtics played 101 games during the 2017-18 campaign and came up a win short of an NBA Finals berth, falling to the Cleveland Cavaliers in Game 7 of the Eastern Conferance Finals.

While players will chew on what wrong at the TD Garden last Sunday throughout the summer (you can read my opinion on that here), fans in Boston have to be encouraged for what the future holds, especially since the expected returns of All-Stars Kyrie Irving and Gordon Hayward for the start of the 2018-19 season.

The 'wait until next year,' cliche never sounded more exciting for those who follow the Celtics.

The C's president of basketball operations Danny Ainge and coach Brad Stevens are already looking forward to the start of training camp, that holds such promise for a title contender roster.

Here's a look at some upcoming dates during the summer, as the Celtics prepare for next season:

June 17: The latest possible date of the Finals to end, Game 7 if necessary.

July 6-17: Las Vegas Summer League, where the Celtics will participate.

Aug. 31: Final day for teams to waive players and use the stretch provision for their salaries for the season.