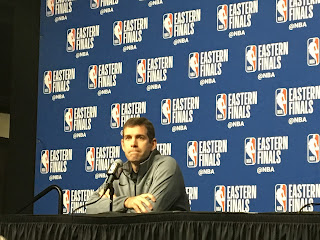 Marcus Morris is very much looking forward to his matchup in the Eastern Conference Finals.

He's not only confident in his ability to defend the Cavs' best player -- LeBron James -- but thinks there's only one other player in the league that can keep up with James better than he can.


"Personally, I think I'm probably the best guy defending him in the league, outside of Kawhi [Leonard]," Morris said after practice Saturday.

When Celtics coach Brad Stevens announced hours before tip-off that Marcus Morris will be starting in place of Aron Baynes in Game 1 against the Cavs, it didn't come as a surprise. Morris' flexibility of guarding players at the wing and in the post is one of the biggest reasons the Celtics traded for him over the summer, and according to Morris it was one of the first topics of conversation he had with Celtics president of basketball operations Danny Ainge.


"That's one of the things he [Ainge] said when I first got here -- that I was one of the guys they felt as though could guard LeBron," Morris said. "So they really wanted me here, and not only because of that, just the toughness and things like that. But that was definitely one of the major points that he brought up when getting me here."

Morris came to Boston with impressive numbers against James as a member of the Pistons. From Opening Night, the Celtics and Cavs seemed destined to meet in the Eastern Conference Finals. It just wasn't expected to happen without Kyrie Irving and Gordon Hayward.

Still, Stevens can't wait to get another crack at James and the Cavs in a best-of-7 series. This will mark the third time Stevens has led the Celtics to a playoffs matchup against Cleveland, second consecutive in the Eastern Finals.


"It's great. At the end of the day, we'd rather be playing and him be in our path, right? I mean, we get a chance to compete against the best player of this generation," Stevens explained. "That is pretty special and our guys look forward to it. But we can't be focused on LeBron versus the Celtics. It's the Cavs versus the Celtics, and the last series proves, those guys averaged 84 points a game last series, the rest of the team, and Love is playing great. Korver is playing great, Smith got it rolling, Hill we talked about. You go down the list.

"Oh, by the way, the best player is setting them up and so, again it's not Celtics versus him, it's Celtics versus them and he's obviously the engine to it. But yeah, what a great opportunity, especially with our guys. It's something that we should be looking forward to."