Report: NBA will not discipline JR Smith for flagrant foul on Al Horford 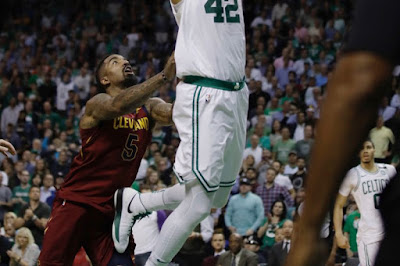 The NBA will not discipline JR Smith for his hard foul on Al Horford in Game 2 of the Eastern Conferance finals, according to a league source that told ESPN's Adrian Wojnarowski.


The NBA will not discipline Cleveland's JR Smith for the foul on Boston's Al Horford in Game 2 of Eastern Conference Finals, league source tells ESPN.
— Adrian Wojnarowski (@wojespn) May 16, 2018


Smith shoved Horford in the back, while the Celtics forward was in the air with 3:37 remaining in the fourth quarter of Boston's 107-94 win over the Cavaliers on Tuesday night. Following a review of the play, the officials assessed Smith with a flagrant foul 1.

After the game, Smith didn't contest the ruling, saying it was a "good call," as he "blatantly" pushed Horford.


"It wasn't like I was trying to low-bridge him or something to make sure he didn't get it. It was a good, hard foul," Smith said. "I can understand why they gave me a flagrant."

Marcus Smart would get in Smith's face following the shove on Horford, resulting in Smith pushing the Celtics guard that lead to each player getting hit with a technical foul.


"Man, we're out there to play basketball, you know? And I looked at it -- Al is a defenseless person," Smart explained. "He's in the air. He can't control how his body goes and he's not even looking, and you go and take two hands to the back -- that's a dirty shot. You can't just allow that to keep happening. That's not the first time J.R. has done some dirty stuff, especially playing against us.

"He's known for it, especially playing against us. We know that. So you know, it's like a bully, you keep letting a bully keep picking on you, he's going to pick on you until you finally stand up and that's what I tried to do. One of my guys was down, and I took offense to it."

Horford agreed with what Smart said -- he called the play unnecessary and credited Smart for backing him up seconds after he was pushed to the ground.


"I felt like it was uncalled for, that type of play," Horford said. "But that's the thing about the group of our guys. We have each other's backs and it is what it is. We moved on to the next play and we just locked in even more after that."

The Celtics have a 2-0 lead over the Cavaliers, as the series will now shift to Cleveland. Game 3 is on Saturday night.

You can watch Smith's foul on Horford below and you be the judge if the right call was made or more should have done by the league.