Paul Pierce on Jayson Tatum: 'He's a superstar in the making' 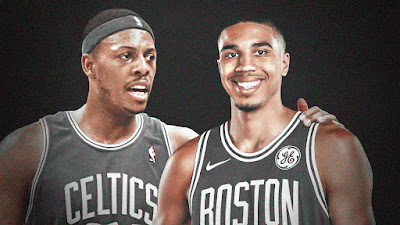 Paul Pierce, who is nicknamed "The Truth" for his ability to score the basketball, is now also calling it how he sees it off the court when it comes to Celtics rookie Jayson Tatum.

Before the start of the regular season, Celtics legend and future Hall-of-Famer Paul Pierce, now in his first season of retirement and working as an NBA analyst for ESPN, praised Tatum when the then 19-year-old came out of Duke already being compared to Pierce.

Now, almost nine months later, Pierce see's why many have seen traces of his game in Tatum's repertoire, especially throughout the NBA postseason, where Tatum leads the Celtics in scoring at 18.1 points per game.


"I see a lot of things Jayson does, how he creates space, gets to the hole deceptively, the way he knocks down shots — he’s a real shotmaker, he can get his shot off on anybody," said Pierce to Boston.com's Chad Finn. "He’s smart. He uses his body well, the way he pushes off with his shoulder to get an open shot. He has a lot of craftiness to his game, and that probably reminds a lot of people of me.

"I see it, I definitely do. I wasn’t the most athletic guy. Tatum is a lot more athletic than I was. He can use either hand. Once he gets a little stronger in the near future, look out. I mean, he’s obviously smart beyond his years.

"When I came out, I was a 21-year-old," Pierce continued. "He was 19 for most of this season. I know that doesn’t sound like a lot, but a year and a half, two years, that’s a lot of developmental time. I had three years of college [at Kansas] to develop. He had one year [at Duke], and he’s already doing this. He’s a superstar in the making. You can compare a kid like that to me anytime you want."

Tatum as earned all the kudos he's been receiving, as he's a huge reason the Celtics find themselves with a 2-0 lead over the Cleveland Cavaliers in the Eastern Conferance Finals, while the series shifts to Cleveland on Saturday.

Tatum was named a finalist for Rookie of the Year earlier this week, another example of his hard work not going unnoticed. The winner will be announced at the NBA Awards next month.