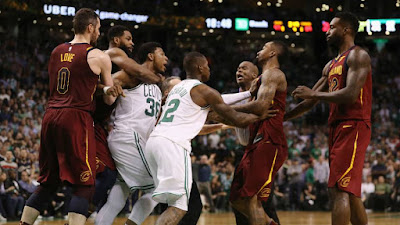 When Cavaliers guard JR Smith shoved Al Horford to the ground in the fourth quarter of the Celtics' win Tuesday night, it changed the dynamic of the game.

Marcus Smart, the Celtics' longest-tenured player, remembers Smith's checkered past. So when he saw Smith's push Horford in midair while the Celtics big man was attempting to complete an alley-oop pass, it didn't sit well with him.

Smart immediately got in Smith's face before the two shoved each other and had to be separated.


"Man, we're out there to play basketball, you know? And I looked at it -- Al is a defenseless person," Smart explained. "He's in the air. He can't control how his body goes and he's not even looking, and you go and take two hands to the back -- that's a dirty shot. You can't just allow that to keep happening. That's not the first time J.R. has done some dirty stuff, especially playing against us.

"He's known for it, especially playing against us. We know that. So you know, it's like a bully, you keep letting a bully keep picking on you, he's going to pick on you until you finally stand up and that's what I tried to do. One of my guys was down, and I took offense to it."

Back in 2015, Smith was ejected from Game 4 of the opening round series against Boston when he drilled former Celtic Jae Crowder in the face. Crowder fell to the floor, injured his knee in the process and was ruled out for the rest of the playoffs.

Horford agreed with what Smart said -- he called the play unnecessary and credited Smart for backing him up seconds after he was pushed to the ground.


"I felt like it was uncalled for, that type of play," Horford said. "But that's the thing about the group of our guys. We have each other's backs and it is what it is. We moved on to the next play and we just locked in even more after that."

The Celtics turned it into a four-point swing, which stretched their lead out to 12 and then to 14 when Horford connected on back-to-back field goals following the pair of free-throws with 2:54 left to play. Smith didn't hesitate in admitting he was in the wrong for what he did to Horford when he spoke to reporters in the Cavaliers locker room.


"It was a good call," Smith said. "I blatantly pushed him. It wasn't like I was trying to low bridge him or something, I just wanted to make sure he didn't get it."