Marcus Smart on pending free agency: 'I want to be in Boston' 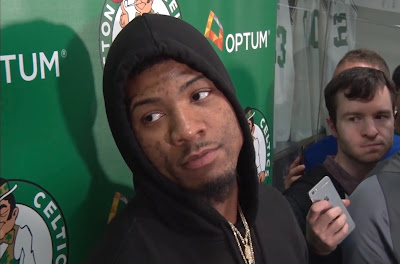 Less than 24 hours removed from a Game 7 loss to the Cleveland Cavaliers, where Marcus Smart might possibly have put on a Celtics jersey for the very last time, the young veteran has let it be known that he would like to remain in Boston for the foreseeable future.

Smart, who will be a restricted free agent this summer, says he will consider all options in the upcoming weeks, but he loves being a Celtic.


"I got a lot to think about. There's a lot of factors that go into it. But that being said, I want to be in Boston. I want to be here," Smart said. "I love this city, I love this team, I love the atmosphere it gives off. I've been here for four years. My heart's here. But there's definitely going to be some factors going into it."

The Celtics fourth year guard and his teammates went through their exit interviews on Monday, to which Smart said that team officials spoke to him as if he would be back next season.


"I'm here. They're already planning for me to be here," Smart said. "Those guys, I tip my hat to those guys. You don't see a lot of organizations that's as clear about their players as the way this organization does it."

Smart made it clear following Sunday's night loss how much he believes he's clearly worth to a team that was one win shy of an NBA Finals berth, when the topic of dollar figures came up.


"To be honest, I'm worth more than 12-14 million," Smart told Jackie MacMullan of ESPN. "Just for the things I do on the court that don't show up on the stat sheet. You don't find guys like that. I always leave everything on the court, every game. Tell me how many other players can say that."

Though the Celtics can match any offer Smart may get this summer, they still might not be able to afford, nor want to pay $12-14 million a year, what Smart is reportedly seeking, to a career 36-percent shooter.

In the Celtics Game 7 loss, Smart finished with 4 points on 1-of-10 attempts from the field to go along with 4 rebounds, 7 assists and zero turnovers in 30 minutes. Despite Smart's poor shooting performance on Sunday, his teammates still insist he is the heart of the C's.

Depending on offers from championship contenders that could mean in the ballpark of a mid-level exception, not many non-playoff teams would overpay for Smart's services. The Celtics could also still extend the 24-year-old's contract and give Smart a salary bump in an extension.

There's also a qualifying off of $6.1 million available for the longest tenured Celtic, where Smart would become an unrestricted free-agent in the summer of 2019. The Celtics would then have decisions to make on Kyrie Irving, Marcus Morris and Terry Rozier, who all would be potential free-agents as well.

Smart was asked if he would sign a deal well below his asking price.


"It's been a long 24 hours for me," he said. "Right now, I'm not really thinking about that, to be honest with you. I'm just thinking about getting back to my mom and making sure she's OK, handling everything I need to do. There's going to be some factors and I need to talk to her, my family, and things like that."

It's been an up and down season for Smart which included him missing time after punching a glass picture frame during a western road trip in Los Angeles, where he received several stitches on his right shooting hand to close the wound. He injured his thumb on the same hand diving for a loose ball in March, which forced him to miss the begin of the playoffs.

While rehabbing a torn ligament in his thumb, Smart was told that his 63-year-old mother, Camellia, was diagnosed with bone marrow cancer. Though he flew back home to spend time with his mother for a few days, he returned ahead of schedule to help the Celtics make it to the East Finals on her wishes to focus on the team's playoff run.


"She's doing good. She's doing better," Smart said. "But [the cancer is] still there, so we gotta deal with some things."

Smart would write "Mama's Boy" on his sneakers in honor of his mother once he returned to the Celtics in the middle of the first round against Milwaukee.

When asked about Smart's year and future, the Celtics president of basketball operations, Danny Ainge kept it short and simple.


"Other than the big picture in his bathroom in L.A.?" Ainge asked with a chuckle. "Marcus had a terrific year. He brings a lot of toughness to our team and his whole time here in Boston he's been terrific."

Based on conversations with Ainge, Smart feels confident that he will be back in Boston next season.


"Danny emphasizes all the time how much he loves me as a player and emphasized how much they want me here," Smart said. "I want to be here, so that's the plan right now."