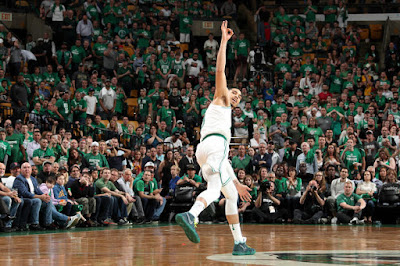 The Celtics are one win away from the NBA Finals.

Boston, in need of some home cooking after dropping back-to-back games in Cleveland, bounced back with vigor as they cruised to a 96-83 win Wednesday night and grabbed a 3-2 lead in their best-of-7 Eastern Conference Finals series.

The Celtics got out in front early. Jayson Tatum was feeling it from the jump, he scored nine points and Jaylen Brown connected on a pair from deep.

Boston closed out the opening frame on a 13-4 run and took a 32-19 lead into the second quarter. Things got heated shortly afterwards when Cavs forward Larry Nance Jr. got up and shoved Marcus Morris after absorbing contact while heading to the basket, Morris pushed him back and so did Terry Rozier before all three were hit with technical fouls.

The brief altercation resulted in a four-point swing, including a 3-pointer from Kyle Korver -- which was followed up by an open look for Jordan Clarkson from behind the arc -- Cleveland pulled to within eight (39-31). However, the Celtics went on a run before the end of the half and grabbed a 53-42 lead.

Celtics kept the Cavs at bay by not only clinging onto a double-digit lead but stretching it out to 16 before the end of the third. Boston took a 76-60 lead into the final 12 minutes of play.

When the Cavs got it down to 12 (83-71), Brad Stevens wasted no time in calling a timeout to regroup -- which turned into three consecutive defensive stops and an alley-op pass from Rozier to Al Al Horford -- which led to Ty Lue to call a timeout with 5:49 left to play. But it didn't help, the Celtics stopped the Cavs yet again and then forced LeBron James into a turnover with under five minutes remaining.

The Celtics will get two cracks at clinching the east, starting Friday night in Cleveland for Game 6 and one final time Sunday night at TD Garden, if necessary.

Cleveland's bench combined for 33 points -- most they've scored throughout the Eastern Conference Finals but it wasn't enough. The Celtics' defensive combined with the offensive rhythm from guys like Tatum and Brown in the second proved to make all the difference when Boston grabbed its big lead.