Al Horford looking forward to Game 7, chance to get to the NBA Finals 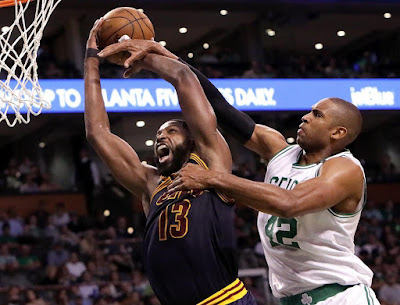 Al Horford is no stranger to playing against LeBron James and the Cleveland Cavaliers in the playoffs. If you didn't already know, this is his fourth straight year that Horford has battled James and the Cavs in the postseason.

In 2015, the 60-win Hawks cruised their way through the East, only to suffer a four-game sweep by Cleveland in the third round, in what might have seemed like Horford's best chance to make it to the NBA Finals.

Horford's finished with 2 points and 2 rebounds in the Game 4 clincher that sent him home for the summer.

The following season after beating the Celtics in six, Horford and the Hawks once again faced off against LeBron James, this time in the second round with the same result.

In Game 4's elimination of the Hawks at the hands of LeBron James, Horford scored 15 points, grabbed 4 rebounds, but missed 4-of-5 three-pointers.

In July of 2016, Horford decided to sign with the Celtics, as they rolled into the conference finals with home court advantage, only to win one game on the road and get knocked out by none other than LeBron James and the Cavaliers in five-games.

Horford contributed with 8 points and 3 rebounds in Game 5 at TD Garden.

After a disappointing Game 6 loss for the Celtics at Quicken Loans Arena on Friday night, where Al Horford had the opportunity to eliminate his personal demon that is LeBron James, he put up a stat line of 6 points on 2-of-8 shooting, 9 rebounds and 4 assists in 37 minutes, and the focus afterwards was on the veteran, who went scoreless in the first half.

Despite another lackluster performance on the road, Celtics coach Brad Stevens would disagree with the notion that Horford didn't play well.


"[Horford] was really productive in the first quarter. He was outstanding," Stevens said on a conference call Saturday. "Every time he touched the ball in the post, it felt like we scored. Al does not care if he's the one that's scoring, he cares that our team scores.

"I think it's easy to look at a stat sheet, but I think, the way that [the Cavaliers] were playing, he made all the right plays, especially early in the game."

Horford didn't mince words when it came to a reporter's question about why he had such a slow start in Game 6.


"If you were watching the game, I was getting doubled as soon as I caught the ball," Horford said postgame. "Every time. I didn't really have one-on-one position. So they did a good job of really doubling me and making it hard."

Horford's value goes beyond the box scores and this Celtics playoff run is evidence of that, especially with the absence of Kyrie Irving and Gordon Hayward.

He's been a role model for teammates such as Jaylen Brown and Jayson Tatum and his leadership on both ends of the floor is a huge reason for the Celtics making it to a Game 7 of the Eastern Conference Finals.


“He’s been such a stabilizing force since he walked into our locker room,” Stevens said. “He provides a very calming influence to the younger players.”

For 11 years, Horford has been waiting for a chance to play for a championship and coming off arguably his best season as a pro, where he was selected to the NBA All-Defensive Second Team, Game 7 may mean more to Horford than any other game he's ever prepared for.

With a trip to the NBA Finals at stake, Horford and the rest of the Celtics should be excited to defend home court, where they haven't loss all postseason and have a 10-0 record.


"I've had a chance now to be in a couple here in Boston, and I think it's really important, again, that we focus on the task at hand and try to play our best, try to play with great togetherness, great competitiveness, and enjoy that," said Stevens. "I think that's one of the things that I don't think has been lost on this group throughout it's entire journey, before the playoffs and now, is we have fun.

"Like we're going to go out and compete, but we're going to enjoy playing the game that we love. That makes it even more fun to be around these guys."

The Cavaliers will start Jeff Green in place of Kevin Love (concussion) on Sunday night, a move that increases Horford's chances of climbing over that proverbial LeBron wall that has always been in the All-Star's way since 2015.

At age 31, Horford can't afford to waste such an opportunity to finally beat James and play in the NBA Finals.