Kevin Love placed in NBA Concussion Protocol, out for Game 7 against the Celtics 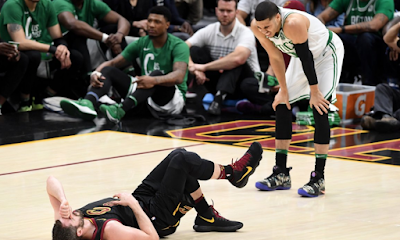 Kevin Love (concussion) will not play for the Cleveland Cavaliers when they take on the Celtics Sunday in a decisive Game 7.

Love was placed in the NBA's concussion protocol on Saturday, according to ESPN, following his collision with Celtics rookie Jayson Tatum in the first quarter of Game 6.

The Cavaliers announced that Love was experiencing concussion-like symptoms after bumping heads with Tatum and did not return to game action once the All-Star forward retreated to the locker room on his own.

Love, who suffered a concussion in the 2016 NBA Finals against the Warriors and again this past March, underwent further evaluation before news broke at halftime on Friday night against the Celtics that he would be unavailable for the Cavaliers for the rest of the game.

Expect Cavaliers coach Tyronn Lue to tweak his rotation for Game 7 in Boston and possibly go with Larry Nance Jr, who finished with 10 points and 7 rebounds in Game 6, or even Jeff Green (14 points off the bench) for Love in the starting lineup.

Celtics coach Brad Stevens took notice how well the Cavs played without Love on Friday, as his team will prepare to host the different looked Cavaliers tomorrow night.


"We'll have to prepare our team to play well regardless of who's on the floor for them," Stevens said. "[Love's absence] changes some of the things they run, offensively. Obviously they have a package of Love plays that they go to on offense, so they end up doing more stuff with LeBron, I thought [George] Hill and [Jordan] Clarkson were good off pick-and-rolls last night, I thought that Jeff Green was really good, and I thought that they continued to have all of the different little wrinkles for [Kyle] Korver and [JR] Smith coming off the screens. Obviously, they run a little bit less of the Love stuff and more of the other stuff."

Tatum was examined by Celtics physicians as the team got together for a film session on Saturday. Stevens says his staff has no current concerns of any lasting affects for the rookie after the collision.


"We had our primary physician and our team doc both in here today checking on him. And he's great," Stevens said. "He felt great this morning, felt great last night when we landed, felt great after the game. Nothing there, as far as to be concerned about, but we will continue to check in."

The Celtics on Sunday will look to advance to the NBA Finals for the first time in eight years, when they host the Cavaliers in Game 7 at the TD Garden, where they are 10-0 this postseason.