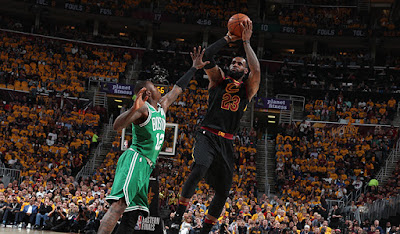 After pouring in 27 points in Game 3's blowout win over the Celtics, LeBron James had plenty left in the tank Monday night and proved yet again why he's the best player in the Eastern Conference Finals.

The ladder isn't a shocking take, however, James' impact in Game 4 made all the difference in Cleveland. His 44 points carried the Cavaliers, especially in the second half, while Boston failed to make its comeback as they played catch-up throughout the night.

In a 111-102 win, the Cavs tied the series, 2-2. Unlike Saturday's game, the Celtics didn't let the game get out of hand -- Cleveland's largest lead was 19 -- still, slicing the deficit to under double-digits was was a challenge for Boston.

The Cavaliers responded from Game 3's win with the best shooting half of the series. They shot 61.5 percent from the floor in the first half, led by LeBron James' 22 first-half points while him, Kyle Korver (14) and Tristian Thompson (10) combined for 46 points -- which was only seven points shy of the Celtics' total points at the half.

Still, the Celtics only committed four turnovers. It kept them relatively in the game despite trailing by 15 (68-53) at the half before the C's cut their deficit down to eight midway through the third quarter.

Boston and Cleveland combined for 17 fouls throughout the frame -- which helped the Cavs control their lead. They took a 89-76 lead into the fourth quarter.

Behind a 7-0 run, the Celtics trimmed the Cavs lead back down to eight (96-88) four minutes into the fourth quarter before Cleveland bumped its lead back into double figures. James tallied 39 points by the 3-minute mark -- which pressured the Celtics to make a final run down the stretch.

After the Celtics gave up an offensive crucial offensive rebound, James made them pay by draining an open 3-pointer as Marcus Smart and Terry Rozier got mixed up in the switch. Smart responded with a 3-pointer of his own on the other end but while facing an 11-point deficit (109-98) the clock started to become a factor.

Out of a timeout, James misfired a trey on one end but Jaylen Brown came up short on his layup attempt and as the clock made its way to under a minute the feeling of Cleveland ultimately tying the series became a reality.

The Celtics will look to take a 3-2 series lead Wednesday night at TD Garden.

The Celtics forced 18 Cavaliers turnovers, including seven from James. Cleveland shot 50 percent from the floor, which made it difficult for the Celtics to match the Cavs' offensive efficiency while shooting 41 percent, including 9-of-28 from deep.