Is Danny Ainge looking to make changes this offseason? 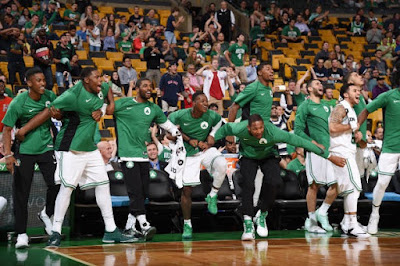 After a tough loss in Game 7 to LeBron James and the Cleveland Cavaliers, is the Celtics president of basketball operations already looking to make changes to his title contending roster for the start of the 2018-19 season?

Danny Ainge answered questions on why Kyrie Irving was absent from the Celtics bench Sunday night at TD Garden, where the C's general manager seemed to have approve of his All-Star point guard's decision.


"Kyrie had a deviated septum, had some surgery on that," Ainge said on Tuesday, before jokingly adding, "and so I don’t think he wanted to be seen. He’s a really good-looking guy, has his movie career."

Ainge is no a stranger to making moves that no one sees coming and while it might seem like the current core of the Celtics will stay intact, at least through the next season, you just never now what can happen.


"I like this group, we’re not looking to make changes, other than a handful of tweaks, said Ainge after Monday's exit interviews. "You never know what opportunities will present themselves."

Al Horford is just one of four players who returned from the 2016-17 Eastern Conference finalist team, that won 53-games and finished with the best record as the No. 1 seed.

Ainge, realizing that Celtics team went as far as they could go, he signed Gordon Hayward, traded away Isaiah Thomas for Kyrie Irving and replaced the core of that roster with younger and more versatile talent.


"Last year, we didn’t know all that stuff was going to happen, but we do feel we have a bright future with this team," Horford said. "It’s something we’re all looking forward to. We can’t think about ‘what could have been.’ But when Kyrie is on our team, we’re at another level."


"We’re not going to do something unless it makes us better. And there’s no guarantee that those deals are there," Ainge said. "At this time last year, I didn’t think we would have 11 new players."

With Irving and Hayward expected to be healthy and make their return by the start of training camp, wouldn't the obvious answer this offseason for Ainge be to just stand pat?


"Obviously those expectations are there, but when you play for the Boston Celtics, you’re always thinking winning a championship," Al Horford said of next season. "That’s why I came here — to be in the position to play in those types of games like [Game 7 vs. Cleveland]. Kyrie [Irving] and Gordon [Hayward] know that, and it’s something we’re all looking forward to."

It should be an interesting 'wait and see' game for those that follow the Celtics closely this offseason, as they were a mere one win away from a trip to the NBA Finals.


"The farther you go in the playoffs, the more difficult it is to lose," Ainge said. "It was one of those games we lost that we should have won. That’s going to eat at all of us for a while."

Yes, that Game 7 loss will do just that for Ainge and his players, but it will also make it harder to predict the future, despite it looking so bright.