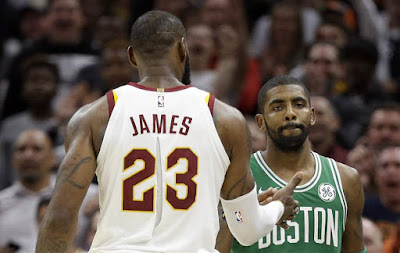 With the distress of seeing one their own go down with a gruesome injury weighing down on them, the Celtics gathered themselves, pulled themselves up and pulled off a gutsy second-half comeback.

After seeing Gordon Hayward carried off the floor on a stretcher, the Celtics had little to no momentum -- which the Cavaliers capitalized on by grabbing the momentum along with a big lead. The Celtics erased an 18-point deficit and grabbed a four-point lead in the final minutes of the fourth quarter but ultimately fell short, dropping game one of the regular season to the Cavaliers, 102-99.

Jaylen Brown led the Celtics with 25 points, Kyrie Irving finished with a double-double (22 points, 10 assists) and rookie Jayson Tatum, who got the nod in the starting lineup, had an impressive debut behind 14 points, 10 rebounds.

The C's completed their comeback by the end of the third quarter, setting the stage for an entertaining fourth. Both teams traded leads until it was a tie game just before the six-minute mark when Irving sunk in a 3-pointer that was answered by Iman Shumpert on the other end. Brown's corner-3 hit the bottom of the net and just like that the Celtics were clinging onto a four-point lead.

But then James took matters into his own hands. He converted on back-to-back possessions, forced a turnover on Smart and found Kevin Love in the corner for a 3-pointer that put Cleveland up, 102-98 with 46.3 seconds left.

Following a Celtics timeout, the Cavs were hit with a technical foul -- where Irving converted the free-throw to make it a 3-point game and in the end it was Irving's last-second 3-point attempt over James that would have tied the game but fell short.

The two embraced for the first time of the night before going their separate ways. In the locker room after the game, James said they didn't say anything to each other but reflected on his emotions of facing Irving and the Celtics.


"Anytime you win a championship with someone, you automatically think about the moments and the memories, especially with someone who was instrumental to what we were able to accomplish," James explained. "But once that ball went up, it was kind of back to our regularly scheduled program."

Meanwhile, in the Celtics locker room, players didn't have a whole lot to say about the game itself but instead took the time to send their wishes to Hayward and his family. When asked how the Celtics managed to put together such a comeback, Irving explained that while their hearts were elsewhere, the team found a way to focus on the game and began chipping away at their deficit.


"At the end of the day, there's still a game to be played as shitty as that sounds,"  Irving said. "We understand that, we're professionals so when one of our brothers go down we just pick the rest of our guys up and we send our well wishes to him and his family and we'll do what's needed for him to start the process of getting back healthy."

Celtics will head to Boston for the second night of their opening season, back-to-back against the Bucks.

The Cavaliers buckled down defensively against the Celtics by making defensive stops throughout the first half and in the final minute of the final frame. Boston's offense was efficient -- limiting themselves to just 10 turnovers -- and it was the biggest reason why they hung around for three quarters of the night.