Jeff Goodman: Should Celtics move on from Marcus Smart? 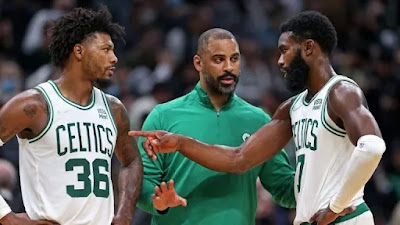 Only five games into the season, the Celtics are looking very similar to the team they were last year-- struggling defensively, showing lackluster effort, and still searching to find the right mix within their rotation.
With a 2-3 record, and coming off another disappointing loss at home to the Wizards Wednesday night, the Celtics are still looking for answers. Boston reunited with Al Horford during the offseason, added Josh Richardson to bring some more perimeter defense, and hired Ime Udoka to instill a new culture, but none of that has seemed to help early on.
After Kemba Walker's departure, the Celtics in need of some stability at the point guard position re-signed Marcus Smart to a four year, $77 million extension with hopes of him molding into their point guard going forward. However, considering the inconsistent play the Celtics have gotten from Jayson Tatum and Jaylen Brown, many have questioned whether their struggles lie heavily on the team lacking a true playmaking-first point guard.
On CLNS Media's The Garden Report, Jeff Goodman fed into that notion, believing the Celtics' two All-Stars can coexist successfully with a true point guard that can run the offense.

"I don't think that they're perfect together, but it's not necessarily because of them, it's also because of the point guard that they've been handed. Whoever it's been-- an injured Kemba Walker, Kyrie [Irving] for a stretch obviously early on in their careers, now you've got Marcus Smart. They're not ball movers. Those two guys need ball movers," said Goodman.

Throughout their careers, Brown and Tatum never had a true pass-first point guard. Isaiah Thomas, Irving, and Walker were all primary scorers, which didn't translate smoothly to their games--shot creating off the dribble, catch-and-shoot, and a lot of isolation.
As for Smart, his early struggles haven't helped the Celtics' cause. Through five games, Smart is averaging only 7.4 points and 4.8 assists, but the concerns also lie in his shooting. Making only 25.5% of his field goal attempts, and shooting 23% from deep, Smart has struggled mightily to contribute in any capacity this season. After a serviceable opening night with 15 points -- including a clutch game-tying 3-pointer sending the game into OT, he followed it up with a 0 point, 5 assist performance at home against the Toronto Raptors in 29 minutes.
That kind of production has fueled concern whether he's the answer going forward -- which explains Goodman's suggestion of moving on from the 27 year-old.

"They have to find a way to trade Marcus Smart and find a point guard who can run a team and make these guys better," he said.

Although he's not known for his offense, it's still been frustrating for a team that needs more production from one of the most important positions. While scoring isn't everything and his defense is still valuable, he hasn't been the playmaker the Celtics' offense needs.
Taking into account his lack of efficiency and production this season, Goodman and Gary Tanguay both believe he's more of a backup than a starter.
Whether or not Smart remains the starter in Boston, the Celtics will need to find their identity sooner than later. In a stacked Eastern Conference, they'll need to address multiple weaknesses on their team -- which starts at the point guard position.
If the Celtics want to maximize the talents of Tatum and Brown, shipping away a hometown favorite for a playmaking point guard might give Boston the spark they need to once again be serious contenders in the East. It's still early in the season, and the Celtics don’t have to press the panic button just yet, but Smart's limitations offensively as both a playmaker and scorer has certainly held Boston back early on.
Ian Carrano
Follow @IC_Sports1