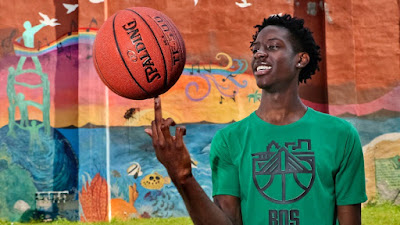 The sports world is still in shock over the passing of former guard for the Wildcats Terrence Clarke, who was killed in a car accident in Los Angeles Thursday afternoon.
The 19-year old Boston native declared himself for this year's NBA Draft after his freshman year at Kentucky this past season and it was announced that he had just signed with Klutch Sports management earlier this week.

"We are saddened and devastated by the tragic loss of Terrence Clarke," Klutch Sports CEO Rich Paul told ESPN. "He was an incredible, hard-working young man. He was excited for what was ahead of him and ready to fulfill his dreams. Our prayers go out to Terrence and his family, who ask for privacy during this difficult time."

Following the Celtics' win over the Suns, players and coaches learned of the devastating news regarding Clarke' death.

"Very, very, very tough," Kemba Walker said when asked about Clarke. "Very tough news, man. He's a very, very good kid. Just always smiling, always energetic. And he was about to get his opportunity, too. My condolences to his family. It's a tough time, man. That's really tough news to hear."

Though coach Brad Stevens said he had never met Clarke, "I know my son looks up to him."
Jayson Tatum and Jaylen both paid tribute to their friend Clarke via social media Thursday night.

"Tell your people you love them everyday!" Tatum wrote on his Instagram story, in reference to Clarke. "Was so proud of you lil bro wish we talked more! This one hurts rest easy king never forgotten praying for the family."

Celtics president of basketball operations sent his thoughts and prayers to the Clarke family as well.


Players around the NBA and basketball world shared their thoughts on the tragic news of Clarke passing away such as Trae Young and his former coach John Calipari.

I am absolutely gutted and sick tonight. I ask that everyone take a moment tonight to say a prayer for Terrence Clarke and his family. May he Rest In Peace. https://t.co/a1E1gysxxi pic.twitter.com/1unTygk4Tt


The accident occurred at 2:10 in the afternoon as Clarke was driving with Kentucky teammate Brandon Boston Jr. -- who survived the crash -- before colliding with another vehicle that was taking a left, he was transported to Northbridge Hospital and later being pronounced dead, per an LAPD spokesman.
According to ESPN's Adrian Wojnarowski, Clarke's mother was by his side when he passed away.
Clarke was from the Dorchester neighborhood of Boston and said he wanted to be an inspiration to the community. He played his high-school ball at Brewster Academy in New Hampshire before playing one year at Kentucky and declaring for the upcoming draft in July.

"There's kids out here that play basketball [but are] never known because they never had the opportunity," Clarke said back in 2019. "I want to do a lot for the community, [be] the guy the younger kids to look up to and say, 'I want to be like him, or better.'"

Our thoughts and prayers are with the Clarke family during this difficult time, may Terrence rest in peace.
Joel Pavón
Follow @Joe1_CSP