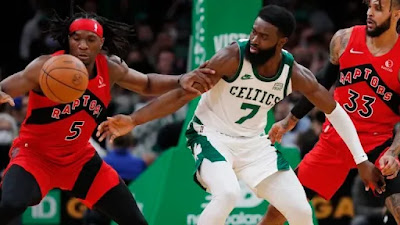 The Celtics followed up a double-overtime thriller against the Knicks with a 115-83 blowout loss to the Toronto Raptors at TD Garden Friday night.
It was an interesting 48 hours following Wednesday's season opener, as there were no injuries to report for Ime Udoka's roster with the return of veterans Al Horford (Health and Safety Protocol) and Josh Richardson to the lineup.
But the big story of the night, despite former Celtics players being introduced prior to tip-off including Danny Ainge, Hall of Famers Satch Sanders and Paul Pierce -- who was just selected as one of the top-75 (technically 76) greatest players in NBA history -- were in attendance, it was Raptors rookie Scottie Barnes that stole the show as the home crowd rained the arena with boos.
Toronto finished with six players scoring in double-figures led by Barnes' 25 points on 11-of-17 shooting to go along with 13 rebounds. Gary Trent Jr. had 20 points, while Precious Achiuwa added 15 points and 15 rebounds for the Raptors (1-1).

"They know the passion of the crowd, we take that, embrace it and use it as fuel. We deserved it the way we played," said Celtics coach Ime Udoka after the game. "The one thing you can't stand as a coach is to get punked out there. They basically came out and punked us, outplayed us."

Jayson Tatum had 18 points on 8-of-14 shot attempts and a returning Horford registered 11 points, 11 rebounds, plus four blocks in 25 minutes as a starter. Richardson went a perfect 4-of-4 on 3's to record 12 points off the bench as the only other that reached double-digit scoring for the Celtics as the fans let the team hear their displeasure throughout the second half.

"The people in Boston know basketball," Richardson said in his postgame presser of the home crowd booing. "They were being honest."

With 9:00 left in the third quarter, Tatum was called for a technical foul and the Celtics trailed 60-51 before scoring eight unanswered points. The Raptors would respond with a 26-5 run of their own to cap the period and take a 80-64 advantage into the final frame.
Boston would only manage to put up 19 points throughout the fourth as Udoka pulled his starters with less than five minutes left to play. The Raptors led by as many as 36 points and closed the game out on a 23-9 run to get their first win of the season and hand the Celtics their second straight loss.
It wasn't exactly the home coming the C's had in mind when it came to the sellout crowd at the Garden.

"It wasn't fun to play, said Tatum during his postgame press conference. "I'm sure it wasn't fun to watch for the fans. First game at home, didn't want it to be like that. We were too relaxed. We didn't play hard enough."

Boston, who shot 39% from the floor, was outrebounded 60-42 and committed 25 turnovers which led to 27 points for the Raptors.
The Celtics (0-2) head to Houston to face the Rockets (1-1) on Sunday, tip-off is scheduled for 7:00 PM ET on NBATV.
Game Notes:
Boston was outscored in the paint 58-32, while the Raptors recorded 16 steals on the night and only turned the ball over 12 times. Jaylen Brown, who recorded a career-high 46 points against the Knicks, only scored nine points against Toronto on 3-of-13 shooting from the field and 0-of-7 from 3.
Joel Pavón
Follow @Joe1_CSP