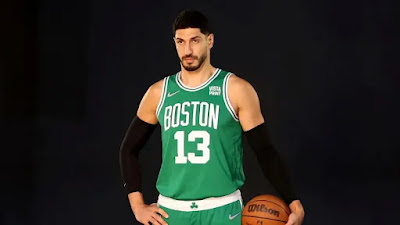 Celtics games have been pulled off the air in China by Tencent following Enes Kanter's recent comments supporting Tibet.
Tecent is one of the leading broadcasters in China and has marked all future Celtics games as unavailable.
Kanter took to social media in a series of posts, calling for freedom to the Tibetan people from the Chinese government and also called China's leader, Xi Jinping a "brutal dictator."


The Celtics center also wore sneakers in support of the Free Tibet movement in the team's 138-134 double overtime loss to the Knicks Wednesday, despite Kanter receiving a coach's DNP.
A leading fan account of the Celtics on Weibo (social media platform in China) that has over 600,000 followers, says that they will immediately stop posting about the team, stating, "Resolutely resist any behavior that damages national harmony and the dignity of the motherland!"
Boston now joins the Philadelphia 76ers in not having their games be broadcasted in China. The Sixers had their games blackout in China last season due to new general manager of basketball operations Daryl Morey, who made comments in a tweet back before the start of the 2019-20 campaign in support of protestors in Hong Kong. Morey was the general manager back then with the Houston Rockets and his tweet led to all NBA games being pulled off the air in China that season.
While that ban has since been lifted and was only limited to Rockets games, it has now followed Morey to Philly which began at the start of last season and remains active today
Joel Pavón
Follow @Joe1_CSP