Kemba Walker excited to be back in the playoffs, off minutes restriction 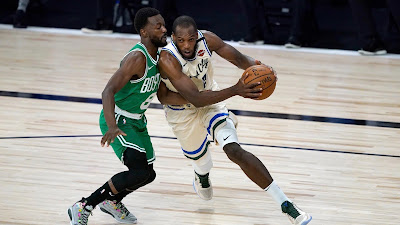 Kemba Walker is excited to be back in the playoffs, as the Celtics are set to face the Philadelphia 76ers in the first round of a best-of-7 series.

The All-Star guard played on a minutes restriction in six of Boston's seeding games in order to rehab a sore left knee and get back into basketball shape ahead of the postseason.

"He's fine, he's ready to roll," said Celtics coach Brad Stevens to reporters Saturday. "It's been a good plan of attack by our training staff. And Kemba obviously played well and minutes wise, should be in good shape."

Ironically, Walker didn't realize his minutes restriction had been lifted by Stevens until he was asked about it following his coach's video media session.


"I didn't even know it was lifted, honestly. I'm happy to hear that," Walker said.

Walker missed 10 games between January and the league shutdown in March, while he experienced swelling and soreness in his left knee during the month of February -- getting it drained several times over two stretches.

After a four month layoff, Walker felt "a little bit of discomfort" in the same knee when he was working out in Boston prior to the team traveling to the Orlando 'bubble' at the beginning of July. He only played in one of the three intersqaud scrimmages -- playing nine minutes in the Celtics' win over the Phoenix Suns.

Walker didn't practice with his teammates on back-to-back days and would have individual workouts leading up to the seeding games. His minutes restriction began when he played only 19 minutes in the seeding opener, as the Celtics' loss to the Milwaukee Bucks. Each game Walker's minutes increased and eventually he reached 32 minutes in Boston's overtime win against the Orlando Magic. Walker did not play against the Brooklyn Nets due to the game being on a second night of a back-to-back and also rested in seeding finale loss to the Washington Wizards this past Thursday.

In the six games Walker played, he averaged 14.2 points on 49.1 percent shooting from the field and 42.3 percent from behind the 3-point arc in 25.2 minutes per contest and the Celtics were 4-2.

Boston finished 5-3 overall in their eight seeding games and with a 48-24 record on the season for the No. 3 seed in the Eastern Conference playoffs.

Walker returns to the postseason after a three year absence, making it only his third appearance in nine NBA seasons. In eight campaigns with the Charlotte Hornets, Walker never got out of the first round and is looking forward to the challenge of being on a contending roster this time around.


"These guys who I play with each and every night, they're a special group, special talents," Walker said. "Everyone brings something different and unique to our team and night in and night out you just never know who that guy is going to be, because we have a lot, especially on the perimeter."

Despite the Celtics finishing 1-3 against their first round opponent Sixers, Walker, averaged 22.3 points (on 37.3 percent shooting from the field) and 4.3 assists in three games played against the 76ers this season, he knows that the series will not be an easy one.