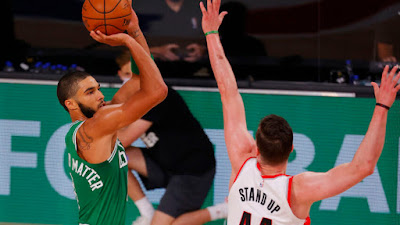 It didn't take long for Jayson Tatum to snap out of a poor shooting performance, as the Celtics bounced back to beat the Portland Trail Blazers 128-124 on Sunday night.

The All-Star forward not only hit 50-percent of his shots (11-22) but also made five 3-pointers on eight attempts for a game-high 34 points, while also dishing out a career best eight assists to lead the Celtics to the win.


"That was a playoff-level energy that we had to play with at the end of the game," said coach Brad Stevens. "This is a great experience."

Tatum, who went 2-of-18 for a total of five points in the team's 119-112 loss to the Bucks Friday, sported a new hair cut and didn't miss a beat, playing point-forward by hitting shots and finding his teammates in the process.

Jaylen Brown finished with 30 points (10-of-18 shooting), hitting 6-of-8 3-pointers and grabbed six rebounds, improving the Celtics to 13-0 when the wing scores at least 25 or more.


"They were special," said Kemba Walker of Tatum and Brown's performances. "Their talent level is unreal, and they can take our team to new heights when they’re playing at this level."

Gordon Hayward continued his clutch fourth quarter scoring, as he netted 22 points (4-5 from 3) and pulled down eight rebounds, while Walker scored 14 points on six shot attempts in his 22 minutes of limited action.

Damian Lillard led Portland with 30 points, 16 assists and Jusuf Nurkic also scored 30 points in only his second official game back since breaking his leg in March 2019. Gary Trent Jr. added 21 points on seven 3-pointers made off the bench for the Trail Blazers, who are now 30-38 on the season.

The Celtics led by as many as 24 in the first half before the Trail Blazers cut it to a 10-point lead with less than a minute left in the third after Lillard was fouled as he hit in an off-balance 3-pointer and a free throw to get Portland within six 92-86.

The Trail Blazers would opened up the final frame with a 15-4 run behind a 3-pointer from Lillard and back-to-back 3's from CJ McCollum (17 points, eight rebounds) to give Portland their first lead since the first quarter (2-0) 101-98 with 9:13 left to play.

Boston with less than two minutes in the fourth used a 7-0 run to take a 125-119 lead before a Carmelo Anthony (13 points) 3 and a backcourt violation was called on Hayward with the Celtics up three with 6.8 on the clock and the Trail Blazers had another possession.

Out of a Portland timeout and the ball in Lillard's hand, the All-Star point guard elected to hit Nurkic with a pass to bank an easy two with 3.4 remaining and Hayward was immediately fouled. The Celtics forward hit two free throws, which was followed by a botched inbound pass by Nurkic to secure the win for Boston -- who are now 44-22.

The Celtics will face the Heat (42-24) on Tuesday night, as they look to increase on their two game lead over Miami for the third best record in the East.

The Celtics shot 54.5 percent from the floor, including going 18-of-30 (60-percent) from behind the 3-point arc. Boston also went to free-throw line 34 times, hitting 26 of them, while Portland went 15-of-16 from the charity stripe.