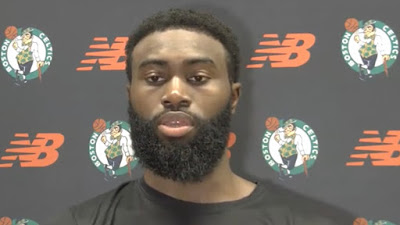 Celtics guard Jaylen Brown was reportedly one of the few players that stood up for the Milwaukee Bucks, who decided to boycott their game on Wednesday afternoon, despite not letting other teams know about their plan prior.

Brown confirmed that report when he spoke to the media for the first time since the league postponed playoff games for three days, saying that what the Bucks did and the player meetings that took place after were "necessary."


"We all – as athletes – came down here to play basketball," Brown said on Saturday. "But in the same sense, we've got stuff that's important. So we're trying to balance both and having conversations and meetings and things like that is all a part of it."

According to Brown, one of the reasons players came to the Orlando bubble was to use their platform to stand up against social injustice, which the Bucks did following the shooting of Jacob Blake this past week. While sitting in the locker room, players spoke to Wisconsin's attorney general and lieutenant governor to demand action be taken.

As proud as Brown was of players coming together for a greater cause over the last few days, he's also upset at some of the headlines and reporting on the meetings, that he believes could have created a divide for all of those involved.


"It was supposed to be a private meeting and I've seen some of the headlines and I think it's an emphasis on the divisiveness of what took place in a lot of those meetings," Brown said. "But what's not being talked about is the unification that was being shown. Like, there was a lot of guys in the room that had a lot to say. We all saw the recent videos and we've all seen the videos over the years, and frankly, we feel helpless and we feel tired.

"I was proud to see a lot of guys come in here and share emotions and have real conversation in the room. Instead, I felt like people are focused on the divisiveness of the conversations but to be honest getting all of those guys in the same room to talk about one thing was important."

Following Thursday's second meeting between player representatives on the 13 teams that are still in the playoffs and league governors, the NBA and NBPA agreed to resume the playoffs and issued a statement that they will continue to combat social injustice, advocate for police reform all while promoting people to vote. It also stated that there'll be a social justice coalition formed immediately and every NBA city where a team owns an arena, owners will work with local officials to turn those arenas into a voting location for the 2020 general election in November.

Brown said he's happy with the what NBA has accomplished when it comes to shinning a light on social injustices, saying the league has "pull out all the stops" by placing "Black Lives Matter" on all courts in the bubble and creating "all the video clips we could possibly do."

But Brown also says he's "not as confident as I would like to be" that what was all agreed upon by the league will come to fruition.


"I think promises are made year after year. We've heard a lot of these terms and words before," Brown said. "We heard them in 2014 – reform. We're still hearing them now. A lot of them are just reshaping the same ideas, and nothing is actually taking place.

While the Celtics and Raptors are scheduled to play Game 1 of the Eastern Conference semifinals on Sunday at 1 pm EST, Brown's mind will be on Blake, who is currently paralyzed from the waist down after he was shot seven times by police.