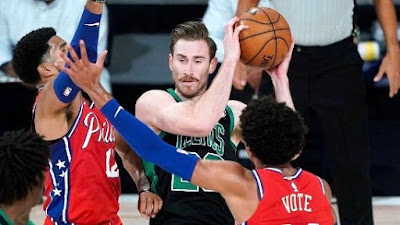 Celtics forward Gordon Hayward will be out four weeks with a Grade 3 right ankle sprain suffered in the team's 109-101 Game 1 win over the Philadelphia 76ers on Monday night.

Boston announced the severity of Hayward's sprain and how long he approximately would be out for early Tuesday afternoon following an MRI.


#NEBHInjuryReport Celtics forward @gordonhayward suffered a Grade III sprain of his right ankle during the fourth quarter of last night’s game against Philadelphia. He is expected to miss approximately four weeks.


Hayward, who finished with 12 points, four rebounds, three assists and four steals in 34 minutes of action, was trying to box out Joel Embiid for a rebound as his right foot rolled on teammate Daniel Theis' left foot when he landed.

Boston had to commit a foul to sub out a limping Hayward with 3:08 left in the fourth and the forward headed directly into the Celtics' lockeroom where he remained until well after the game ended.


"Sprained ankle," Celtics coach Brad Stevens said. "Don't know the severity, but he's clearly in pain, and it looked like it had some swelling already. That's my medical review."

Hayward was seen exiting the arena on crutches and a walking boot following being looked at by the Celtics medical staff.


This is not the same ankle that caused Hayward to miss the 2017-18 campaign with a gruesome leg injury just minutes into his Celtics debut. The former All-Star had come close to his days with the Utah Jazz this season, averaging 17.5 points on 50 percent shooting from the field (38 percent from 3), 6.7 rebounds and 4.1 assists.

Hayward, who has a player option for next season, was already planning to leave the NBA 'bubble' at end of the month for the birth of his son. But now if this injury he could end up leaving sooner to be with his family while he rests and possibly make a return if the Celtics are still playing playoff basketball.

For now, it's likely that Marcus Smart will slide into the starting lineup while Semi Ojelye and Romeo Langford could see an increased role and or minutes.

Game 2 of the Celtics and Sixers first round series will tip-off on Wednesday night at 6:30 pm EST on TNT.