Jaylen Brown speaks on racial implications of the national anthem 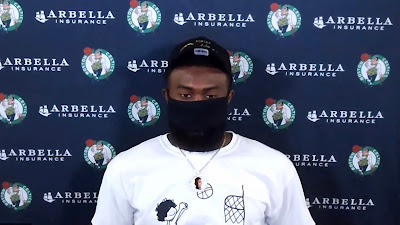 Jaylen Brown continued to use his platform to keep systemic racism at the forefront, following the Celtics' 128-124 win over the Portland Trail Blazers on Sunday.

Brown, who finished with 30 points and six rebounds, started off his media video session by thanking NBA commissioner Adam Silver for allowing players around the league to peacefully protest racial injustice and thanked the Celtics organization as well before speaking about the racial implications of the national anthem and its third verse.


"Angela Davis once said that racism is so dangerous not because of individual actors but because it's deeply embedded in the apparatus. I think about that quote a lot when I think about the national anthem, which was written by Francis Scott Key, who was a slave owner. When we talk about the national anthem, we don't really talk a lot about the third verse that was written, which addresses slavery and mentions there's no hope for a hireling or slave but the gloom of the grave. So racism is so deeply embedded in our country that people don't even flinch or even shift at the idea. It kind of is what it is.

"It's not the protests, it's not the police officers, the police brutality—it is, all that is important—but it's also the framework of systemic oppression, and that started with the national anthem. I think being able to take a knee is appropriate, and it may not even really be enough. But I'm proud of the NBA being a part of the right side of how people feel."

Teams and players have participated in peaceful protests while in the Orlando 'bubble' by wearing Black Live Matter shirts, locking arms and taking a knee during the national anthem since the NBA restarted its season this past Thursday.

Brown and several other Celtics players and even coach Brad Stevens have been vocal about police brutality against Black people. Boston as a team elected to make a statement by displaying messages of social justice on the back of their jerseys throughout the league restart.


Watch Brown's full postgame presser below as he shares his thoughts about racism in America.