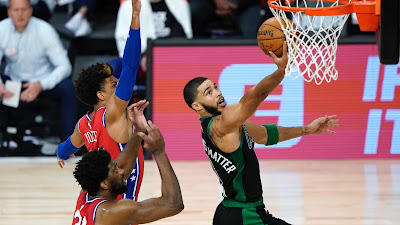 The Celtics kicked-off the 2020 NBA playoffs with a 109-101 win over the Philadelphia 76ers in Game 1 of their best-of-7 first round series.

Jayson Tatum led all scorers with 32 on 10-21 shooting from the field and grabbed 13 boards for a playoff career-high double-double (points and rebounds).


"Offensively, it doesn't feel like he's got 32 at the end of the night," Celtics coach Brad Stevens said. "He just plays the game within himself. He did a lot of good things tonight."

Jaylen Brown finished with 29 points, while Kemba Walker, who's minutes restriction was lifted, scored 11 of his 19 points in the final frame to go along with his five assists for the Celtics.

Gordon Hayward chipped in 12 points before limping off the court with 3:08 left in the fourth quarter after his right foot landed on Daniel Theis' left foot going for a rebound. Coach Stevens called it a sprained ankle and it's unknown if Hayward will miss any significant time.

Joel Embiid had 26 points and 16 rebounds for the Sixers, who are without Ben Simmons (knee surgery) for the postseason. Josh Richardson and Alec Burks each netted 18 points, while Tobias Harris added 15 points, eight rebounds and eight assists for Philadelphia.

The Celtics went on a 9-0 run that included seven straight points by Brown, giving Boston a 92-86 lead that turned into a 10 point advantage before the 76ers made one last push. With less than a minute to play, Philadelphia cut their deficit to 103-100 after a 3-pointer by Richardson. But the C's hit six free straight throws in the final seconds to ice the game and take a 1-0 series lead.

Game 2 of this first round matchup is scheduled for Wednesday night, as tip-off is at 6:30 pm EST on TNT.