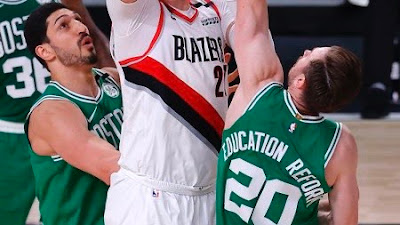 The Celtics have been pretty clear on where they stand when it comes to systemic racism and police brutality since arriving in the NBA 'bubble' nearly a month ago.

Each of the 17 players on Boston's roster all agreed to make a statement when it comes to keeping social injustice at the forefront by wearing one of the league's pre-approved messages on the back of their jerseys during the restart.

While there was "Black Lives Matter," "Enough," "Freedom," "Peace" and many others to choose from, the Celtics revealed which message each player would wear last week prior to the seeding games tipping-off and Gordon Hayward elected to go with "Education Reform."

Hayward, who hadn't spoken to the media since his decision, explained why he chose that message, as 11 other players around the league have decided to wear it as well.


There's a lot of issues that are going on right now that need to be fixed and need change," Hayward said after Tuesday morning shootaround. "One thing that I'm passionate about is education. I think education is the key. Especially having little kids of my own, giving little kids the opportunity, it hits home. Everybody should have an equal opportunity and certainly, there's a lot of places that don't. It's those places that really need our support. There's a lot to be done in that area.

"My wife and I have been in the education sector in Boston since we've gotten here, and it's something that we'll continue to do."

Though Hayward has received some criticism via social media about his message not being strong or relevant enough when it comes to social justice, the Celtics forward clearly believes education could play a major role in fixing current issues.

Portland's CJ McCollum, who played against the Celtics in the Trail Blazers' 128-124 loss on Sunday, also chose to wear "Education Reform" on the back of his jersey.


"I'm big on education. I think that's really important. It's something that we lack especially in certain communities, the Black community and people of color, communities where kids are at a disadvantage," McCollum said about his choice last month. "I think there needs to be more light on that, so that's kind of been my focus and will continue to be my focus. Obviously there’s a lot of things that need fixing in this world, but historically, I've focused on education."