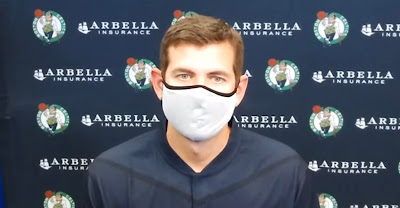 Celtics coach Brad Stevens has been less than impressed with his team's defense through their first three seeding games in the NBA restart.

Following Boston's 112-106 loss to the Heat on Tuesday night, Stevens was not happy about how Bam Adebayo was able to score his 21 points and grab 12 rebounds with relative ease, while Miami also hit 15 shots from beyond the 3-point arc.


"They did a great job cutting and we weren't solid and they exposed that," Stevens said. "Our defense has to improve from what it's been in the first three games. But credit Miami, they played with unbelievable intensity and togetherness and I thought they were clearly the better team.

"I thought we started off defending really well in the first three minutes. We were very active, very locked in, very engaged. We missed a few shots and for whatever reason it went downhill (defensively) from there."

Celtics defense is allowing 118 points per 100 possessions in Orlando bubble. Only Blazers and Sixers have been worse on D out of the 22 bubble teams.
— Brian Robb (@BrianTRobb) August 5, 2020


The Celtics are having a hard time playing defense without committing a foul, racking up a total of 26 fouls against the Heat. Despite Adebayo missing seven free throws, the All-Star forward had no problems getting to rim, while Boston fouled him routinely as the only way to somewhat slow him down.

It didn't make a difference as Adebayo went to the free throw line 18 times and the Celtics as a team only made 22 trips to the charity stripe. To make matters worse, Marcus Smart, Boston's best defender had a tough time trying to keep up with the athletic 6-foot-9 Adebayo, fouling out with 3:46 left in the third quarter.


"We're fouling because they're getting the ball so deep," Stevens said. "The post fouls, they're just getting it deep and they're using their strength and size. We're going to have to not allow the ball to get deep. We're going to have to figure that out. At the beginning of the year, I thought we guarded with great intensity and we kept the ball out of the paint. We're not doing as good of a job now at keeping the ball out of the paint. If it gets down there, we're toast."

While Smart has been great throughout the season defending all positions, the Celtics have to get back to helping out defensively as a team's which is what landed Boston as one of the league's top-five defensive rosters before the layoff. They can't allow to leave shooters open from 3 or let an opponent's second unit light it up for 43 points like the Heat did.


"Defense is a collective effort," said Jayson Tatum after Tuesday's loss. "It isn't one man's job, it's not two guys, it’s everybody on the floor, talking, communicating, following the game plan and being on the same page. We can't leave it up to one guy. It's a team thing."