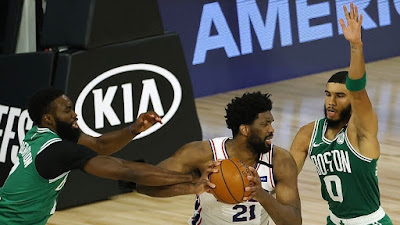 It seemed like another day at the office for All-Star Jayson Tatum, who lead the Celtics to a 128-101 Game 2 victory over the Philadelphia 76ers on Wednesday night.

Tatum topped his previous playoff career-high in Boston's Game 1 win (32 points) to score 33 points on 12-of-20 shooting from the field and hit 8-of-12 3-pointers, along with 5 rebounds and 5 assists in 31 minutes played.


"I'm playing confident," Tatum said after scoring a combined 65 points in the first two games of this series. "Just trying to be aggressive and trying to make the right play. I say that a lot, but that's the easiest I can break it down. ... They're drawing a lot of attention. I know they're blitzing and maybe denying me from catching, and so setting screens to get other guys open, just trying to make the right basketball play at the right time during the game, and just trying to help my team out as much as I can."

Kemba Walker finished with 22 points, while hitting 8-of-16 from the floor and Jaylen Brown added 20 points on 6-of-13 shooting for the Celtics -- to lead the Sixers 2-0 in their first round best-of-7 series.

Marcus Smart (10 points) started in place of Gordon Hayward, who is out four weeks with a right ankle sprain. Boston shot over 51-percent for the game and committed only seven turnovers, including just two in the first three quarters.

The Sixers lead by as much as 14 in the first quarter before the Celtics outscored Philadelphia 38-24 in the second quarter to lead 65-57 at halftime.

Brown scored seven points to open the third, including a 360 dunk to give Boston it's largest lead at that point 74-59 with 7:35 left in the period. The Celtics held Philadelphia to 22-percent shooting for the quarter and pushed their lead 98-75 heading into the final frame.

The Celtics are now 20-0 this season when they shoot 50-percent or better from the floor. Jayson Tatum became the youngest player in Celtics' history to score at least 30-points in back-to-back playoff games at 22 years-old and 169 days.