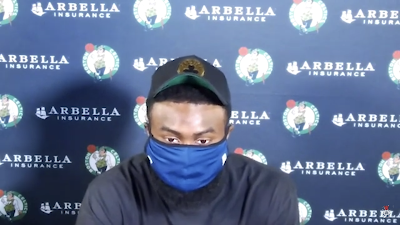 It was just another day at the office for Brown, who finished with 19 points and 12 rebounds for Boston's third straight victory. Instead, the C's guard decided to speak about more important topics.

Brown began his postgame video media presser by demanding justice for Breonna Taylor, the 26 year-old Black woman who was shot and killed by Louisville police back in March. The Celtics guard also called for "guys in the community to get out and vote," while turning his attention to term "police brutality."


"Flashback to May 25, we watched George Floyd, a human being, be violently killed," Brown said. "The four men who nonchalantly terrorized Floyd belong to state-sponsored law enforcement. Law enforcement that historically in America has targeted and profiled Black and minority civilian populations throughout time."

Brown said that while some around the nation are able to see the police as protectors, "and maybe even peacekeepers," he is not "from that side of America."


"I'm aware that, without being drafted by the Celtics, without being in the place I am now, that I would still be on that other side of America," Brown said. "So I want to take a look at the term police brutality and maybe offer another term, as domestic terrorism. Because that's what it was in the eyes of George Floyd."