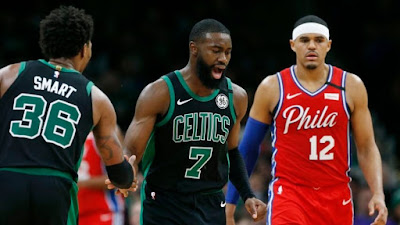 The 2020 NBA playoff bracket is set in the Eastern Conference and the Celtics know who they'll face in the first round.

Boston, who have locked in the No. 3 seed in the East, will square off against the No. 6 seed Philadelphia 76ers in round one of the postseason. This is the second match-up in the playoffs between the these two teams in the last three years.

While the Sixers won their regular season series against the Celtics 3-1, Philly enters the playoffs without All-Star guard Ben Simmons -- who is sidelined after undergoing surgery to remove a loose body from his left kneecap.

Philadelphia's superstar big man Joel Embiid also injured his ankle this past Sunday in the first quarter against the Portland Trail Blazers and did not return, then suffered an injury to his right wrist in the Sixers' loss to the Toronto Raptors Wednesday night. Though x-rays were negative, Embiid sat out the second half and it's unlikely that he'll even play in the 76ers' seeding finale against the Houston Rockets on Friday.

Former Celtics All-Star and fan favorite Al Horford, now turned Sixers' forward, is looking forward to playing against his ex-teammates, even he won't admit if he regrets signing with Philadelphia or not.


"For us, it's a great opportunity," Horford told The Boston Globe's Gary Washburn. "It's part of the business. Obviously, we've already played them plenty of times this year so that effect is out of the way, so now we can go out there and compete. It should be a fun series."

The playoffs are set to tip-off on Monday and while the Miami Heat and Pacers still haven't locked in their exact seeds, they will be the No. 4 verses No. 5 match-up in the first round. Miami needs one win in its final two seeding games to officially clinch the fourth seed.

The Celtics at 48-23 and currently on a four-game win streak in the restart, will take on the Washington Wizards (24-47) on Thursday in their seeding finale