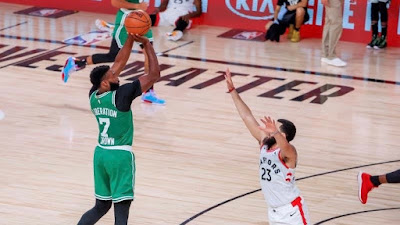 The Celtics made a statement against arguably the best team in the NBA 'bubble' with a 120-100 win over the defending champion Toronto Raptors Friday night.

Jaylen Brown finished with a game-high 20 points on 7-14 shooting, including going 4-8 from behind the 3-point arc. Jayson scored 18 points and grabbed seven rebounds, while Kemba Walker, who sat out in the team's trouncing of the Nets, added 17 points in 23 minutes.

The Celtics at 46-23, led by as many as 40 points - giving themselves some hope of still catching the No.2 seed, as they're now three 1/2 games behind the Raptors for the second best record in the Eastern Conference. Either way, with three games remaining it seems inevitable that these two teams are on pace to meet each other in the semifinals.


"This game will mean nothing if we get that opportunity again," said Celtics coach Brad Stevens. "They're a really good team. I thought they missed a lot of open looks and it just wasn't their night. Our guys played well, but it won't mean anything in a couple weeks."

Seven players scored in double-figures for Boston including Brad Wanamaker (15 points) and Daniel Theis, who notched his second double-double in the restart with 11 points and 11 rebounds.

The Celtics, who never trailed in this one, jumped out to a 12-2 lead in the first quarter and it was all downhill for Toronto - which hadn't trailed by anymore than six points in all of their previous four seeding games that resulted in wins.

The closest the Raptors came to cutting their deficit was ten points to start the second half, only to have the Celtics go on a 36-12 run the rest of the third quarter.

Boston lead 91-57 to start the final frame before the Raptors threw up the white flag, falling to 4-1 in Orlando and giving the Celtics their second straight victory while improving to 3-2.

The C's won their season series against Toronto 3-1 and look to continue the momentum when they face the Magic on Sunday afternoon.

Boston shot 49 percent from the field and held the Raptors to 10-of-38 shooting from beyond the arc. The Celtics out-rebounded Toronto 58-49 and assisted 27 times on 47 made baskets. Robert Williams once again took advantage of his playing time for the second consecutive game, scoring 10 points and grabbing five rebounds in 11 minutes off the bench.