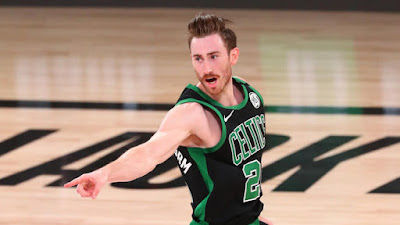 The Celtics were healthy in the NBA 'bubble' for one of the few times this season before forward Gordon Hayward went down with an ankle injury that will sideline him for approximately four weeks.

Hayward suffered a Grade III right ankle sprain late in the fourth quarter of the Celtics 109-101 Game 1 win over the Philadelphia 76ers and though it was not the same ankle that went through the gruesome injury back in 2017, some might look at this as a major hurdle in the C's quest to come out of the Eastern Conference.

But can Boston overcome Hayward's loss until mid-to-late September? Celtics legend and ESPN analyst Paul Pierce has his doubts.


"I think it's a huge blow. When you look down at that roster, there's not much depth — Marcus Smart, Enes Kanter... The bench scored 8 points in Game 1. You know how much they won by? Eight points," Pierce said during his appearance on ESPN's "First Take" Wednesday morning.

"That's a critical blow for them to lose that point production, a guy who can spread the floor, who can knock down shots, a guy who can get the ball and play pick-and-roll. Yes, (Jayson) Tatum and (Jaylen) Brown's numbers will go up, but I think with his injury, it's going to level the playing field with Philadelphia. They didn't win by much and the Celtics don't have a deep bench, so this series could be a long series for Boston."

Hayward averaged 18.7 points in the seeding games, up from 17.5 points prior to the NBA stoppage -- including scoring 31 points in the team's overtime win over the Magic 10 days ago. He clearly upped his production from the forgettable 2018-19 campaign where he was coming off the bench. This version of Hayward was not only an efficient scorer at 50 percent from the floor and a playmaker, but his production was as close to his former All-Star self in Utah.


"This guy is the fourth option. They need that 17 (points). What other fourth options around the league are giving you 17 points a game and could potentially be an All-Star again when right?" Pierce added. "You need a guy like this. You got Kemba (walker), Tatum and Brown. Those are the guys. His role is going to be his role... He's the perfect complement to what they need."

Despite Hayward having his best season in Boston and looking forward to possibly making a deep playoff run, he was already planning to leave Orlando for the birth of his son. Now with him projected to miss four weeks, that puts a potential return around the start of the Eastern Conference Finals. Assuming the Celtics get by the Sixers and maybe the defending champion Toronto Raptors in the second round, Pierce thinks the road to the NBA Finals is a big 'if' now with Hayward's injury.


"I had the Celtics coming out of the East because the way I see it, when you look at it now, the East is wide open," Pierce said. "I mean, Orlando beat Milwaukee — they look vulnerable and no home-court advantage. That was a huge blow for Milwaukee. They were the favorites because they would have had home-court advantage, crowd behind them, new stadium, and so it's wide open."