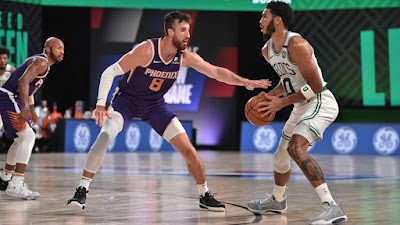 For Brad Stevens, Jaylen Brown's stellar exhibition performance in the Celtics' first win since the NBA restart didn't come as a surprise.

Sure, it's going to take a while for players to adjust to their new surroundings, to the league's new format, even down to the way the game is displayed -- a crowd-less environment is a lot to get used to. But when the Celtics head coach was asked if maybe Brown was a player playing for a new purpose -- in the wake of protests for equality happening across the country, even Brown himself led one in Atlanta -- Stevens said he didn't think that was the case for Brown, whose 21 points on 7-of-13 from the floor helped lead the Celtics to a 117-103 win.

"He works really hard to get better, I don't know that I would deem it a new purpose," Stevens said. "He's always been a guy that's been very competitive, very driven, wants to be great, works hard. I don't see a whole lot of change from him from that perspective. I just see a guy who's continuing to add experience on experience.

"He's a huge part, obviously, of our team. We're going to need him to be good to have a chance."

Jayson Tatum bounced back from Friday's slugglish start when he poured in 16 points and 9 rebounds and Gordon Hayward finsihed with 17 points to go with his six boards. Brown's 10 first-quarter points got the Celtics out to a quick start as they spent most of the afternoon controlling the pace of the game.

The Suns managed to hold onto a solid lead at the beginning of the second half before the Celtics closed out Phoenix's third quarter on a 24-4 run. Devin Booker led the Suns with 17 points and Mikal Bridges added 16 points and five rebounds.

Next up for the Celtics will the Rockets on Tuesday night. It will be the final exhibition game for Boston before the regular season restart.