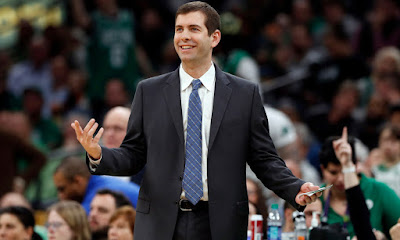 The Celtics have signed coach Brad Stevens to a contract extension, the team announced on Wednesday.


.@BCCoachStevens is here to stay 🙌☘️


Stevens, 43, was hired by Boston back in 2013 to succeed Doc Rivers. During his seven-year tenure so far, he has a 318-245 record -- the fourth most wins by a coach in franchise history.


"Brad is one of the most intelligent and hard-working coaches in the game today," Celtics president of basketball operations Danny Ainge said in a statement. "More importantly, his character and integrity have contributed to a culture that we all highly value here."

Though terms of the deal were not disclosed, the Celtics look forward to Stevens, who has advanced to the playoffs six times, including back-to-back trips to the Eastern Conference Finals and being named Eastern Conference Coach of the Month three times -- to add to his achievements.


"Brad is an accomplished coach and an outstanding person," Celtics co-owner Wyc Grousbeck said in a statement. "We are proud to have him lead our team forward in our quest for Banner 18."

The Celtics this season at 48-23 in a somewhat shorten 2019-20 campaign, due to a global pandemic, will enter the playoffs with the East's third best record, despite one game remaining.


"We are thrilled that Brad Stevens will continue to be our coach," added co-owner Steve Pagliuca. "He has become one of the best coaches in the NBA, and is a real leader on and off the court. This is a great day for the Boston Celtics."

Stevens and the Celtics will face the Washington Wizards on Thursday in their seeding finale.