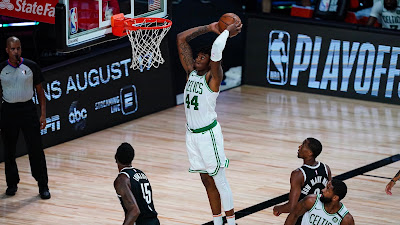 Brad Stevens called out his team on their lackluster defense throughout the NBA restart and the Celtics responded with a 149-115 blowout of the Brooklyn Nets Wednesday night.

Jaylen Brown led all scorers with 21 points on 7-of-13 shooting, including five 3-pointers on nine attempts in 24 minutes of action, while Robert Williams III added a career-high 18 points in just 19 minutes off the bench.

Williams, who hadn't played in the first three seeding games, took full advantage of his playing time, going a perfect 7-of-7 from the field and 4-of-4 from the free throw line to go along with five rebounds, three blocks, two assists and a block.


"It's really just the will to want to play," said Williams in his postgame media video session. "I want to bring the right energy. I think a lot of the young guys brought great energy. That is my job."

Williams also added that he needs to improve his conditioning: "I should have been contesting more shots," he said.

According to Stevens, he didn't tell Williams that he was going to play "until he was walking on the bus," after the Celtics coach called out his squad to play better team defense following Boston's 112-106 loss to the Heat on Tuesday.

Not only did the Celtics hold the Nets to 8-of-32 shooting from behind the arc, they also forced 14 turnovers that lead to 15 fast break points.

Jayson Tatum added 19 points and Gordon Hayward scored 18, as no starter played more than 33 minutes. The Celtics, who were without All-Star Kemba Walker (rest) due to him not playing on a second night of a back-to-back, finished with a season-high 69 points off the bench while every player that check in scored at least three points or more.

Marcus Smart (12 points, six assists) started in place of Walker and Brad Wanamaker also provided a solid lift at the point guard position with 13 points and five assists as a reserve.

Seven Celtics players finished with double-digit scoring in the 34-point win to increase their lead as the No.3 seed to a full two games ahead of Miami with a 45-23 record on the season and are 2-2 in the Orlando 'bubble' with four games remaining.

Jeremiah Martin led the shorthanded Nets with 21 points and Joe Harris netted 14 points. Caris LeVert was held to only 13 points, after scoring a career-high 51 points against Boston in an overtime win at TD Garden the last time these two teams met just before the season was suspended back in March.

Brooklyn, who had a chance to clinch a playoff berth with a win over Boston, falls to 32-36 on the year and are currently the No. 7 seed.

On Friday, the Celtics will face the Toronto Raptors (49-18), who are 4 1/2 games ahead of Boston with the second best record in the Eastern Conference.

Boston out-rebounded the Nets 53-45 and assisted 29 times on 50 made shots. The Celtics were also 29-of-35 from the free throw line to Brooklyn's 17-of-21 made freebies. It was sixth time this season that the C's have scored at least 130 points, the most in franchise history since the 1990-91 campaign.