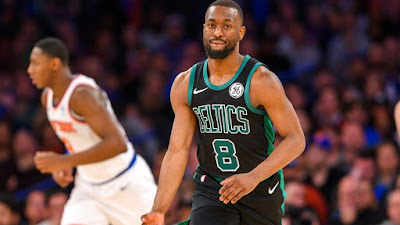 The then free agent seriously considered heading back home to play for the franchise he grew up cheering for, but instead Walker believed Boston was "just a better fit" for him as he signed a four-year, $141 million contract with the C's.

Walker spoke about how much interest he really had when it came to possibly signing with the Knicks over a year ago during his appearance on The Ringer's "RC2C" Podcast this week.


"To be honest, yes. Yes. Very serious, very," Walker said to Ryan Rucco and CC Sabathia. "Before Boston actually came along, the Knicks were one of my top priorities, actually, because I was thinking they were gonna get another player. But it didn't work out."

Was there ever a chance @KembaWalker would play for the Knicks?

Yes! He explains what happened to @CC_Sabathia and @RyanRuocco on the @R2C2 podcast. pic.twitter.com/U82fUFFul4
— The Ringer (@ringer) August 6, 2020


While rumors at that time was that the Knicks were all in on bringing top free-agent Kevin Durant to team-up with Walker, but it was the Brooklyn Nets that beat them to it by signing both Durant and former Celtic Kyrie Irving.

Durant, however, cleared up those very rumors about him ever considering signing with the Knicks on an episode of Showtime's "All The Smoke" Podcast this past February, calling those reports overblown and untrue.


"That's the media hyping that shit up," Durant said to Matt Barnes and Stephen Jackson. "I never came out and said anything about me wanting to play for the Knicks, ever. Ever."

"It wasn't like I had something against the Knicks. I just didn't like all that attention when I was playing for another team. I never really was big on that New York thing. It was just everybody else, the media, the fans. The Knick fans, they wanted a superstar to come play for them finally. I never promised anybody I was playing for the Knicks."

In the end the Knicks struck out on signing any key top-tier free agents, while the Celtics are reaping the benefits of Walker's 20.8 points and 4.8 assists per game average this season. Despite the four-time All-Star dealing with a nagging left knee injury over the last several months, Walker has been encouraged by the progress he's made in the NBA bubble so far.


"For me to feel like myself again, it definitely feels good. Just gives me a lot of confidence heading into those games," Walker said on the "R2C2" Podcast.

Walker and the Celtics, who are currently 2-2 in the Orlando restart, face the Toronto Raptors Friday night.