Jaylen Brown on the shooting of Jacob Blake: 'Are we not human beings?' 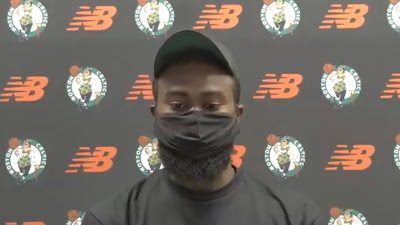 Celtics guard Jaylen Brown opened up his video media availability on Tuesday with addressing the shooting of Jacob Blake by a Kenosha, Wisconsin police officer.

On Sunday a video captured by a neighbor, which has gone viral -- showed an officer shooting an unarmed Blake, 29, in the back seven times as he tried to get into a vehicle in which his three children were in the back seat. The shooting has left Blake paralyzed and has caused social unrest in Kenosha.


"People post my jersey all the time, No. 7," said Brown. "And every time I look at my jersey now, what I see is a Black man being shot seven times. All America sees is his background report. It's easier to see that than it is to see the truth."

Marcus Smart, along with Brown did not field one basketball related question, as Boston and the Raptors are schedule to play Game 1 of their second round best-of-7 series on Thursday night.


"We, as a team, are definitely trying to figure out something that we can do to contribute and help with this cause," said Smart on Tuesday afternoon. "It's just sad that we have to still be sitting here talking about this, and we're still having protests, and we're still seeing the same things that we've been fighting for, and it's common sense reasons that we shouldn't be going through that are still happening.

Brad Stevens said the Celtics spoke about the incident during a team meeting and also noted the emotional strain that was clearly visible on his players' faces.


"Obviously, that video was horrifying. That video was awful. And to think of three kids being in that car is like — that just makes you shaken, right?" said coach Stevens. "It's ridiculous. We've talked about it as a team and just how we feel. We haven’t talked about it enough but obviously everybody is shook.

"There's a reason why the guys, coaches, players, everyone here has chosen to really emphasize social justice and racial equality while we're here. To think that this happens again — I thought LeBron [James'] words were poignant [Monday] night. I've heard those over and over. I've said this before, I can't pretend to understand what that's like because I don't know what that's like. But I know I've heard it over and over. So there;s obviously a problem. So I completely understand everybody's emotions here and elsewhere, with regard to that."