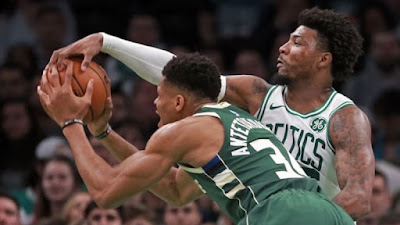 The NBA released their end of the year award finalists Saturday and no Celtics player or even coach Brad Stevens made the list.

The league announced three finalists for each individual award for the 2019-20 season and Jaylen Brown was not happy about his Celtics teammate Marcus Smart not making the cut for Defensive Player of the Year consideration.


Brown took to twitter to voice why he believes Smart not only should have been a finalist, but called the Celtics veteran guard "the best defender in the NBA night in, night out."


Marcus Smart the best defender in the NBA night in night out
— Jaylen Brown (@FCHWPO) August 8, 2020


While Smart is highly regarded, if not arguably the league's best defender at the guard position, the odds have never been quite in his favor to be a finalist -- despite making the NBA's All-Defensive First Team for the first time in his career a year ago.

The last guard to win the Defensive Player of the Year Award was Gary Payton in 1996. Smart, who is ninth in steals this season, should be in the conversation once again for All-Defensive Team honors.

Still, this season's three Defensive Player of the Year finalists that include Jazz center Rudy Gobert (13.6 rebounds, 2.0 blocks, 0.8 steals per game), Bucks forward Giannis Antetokounmpo (13.7 rebounds, 1 block, 1 steal per game), and Lakers center Anthony Davis (9.4 rebounds, 2.3 blocks, 1.4 steals per game) are all worthy of the award for the fact that they battle with some of the league's toughest big men on a nightly basis. But Smart's ability to defend virtually any position at any given time is what makes the Celtics' guard a unique defender for his size.

Smart is not just physical when it comes to his match-ups, but he's also vocal in encouraging his teammates whether he's on the floor or on the bench. His leadership plays a huge role in being a great defender and it's infectious with whoever he plays with.


"Marcus is the heart and soul of the team, said Jayson Tatum following the Celtics' impressive 122-120 win over the Raptors. "He brings so much more to the team that doesn't show up in the stat book. So just hearing his voice and him talking on the court, off the court, it can help us. When he's doing that we're a better team."