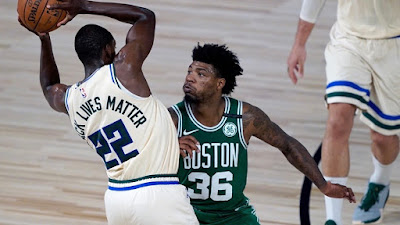 After more than four months (140 days, to be exact) of no NBA basketball, the Celtics resumed play with a 119-112 loss to the league leading Milwaukee Bucks to reopen the season in Orlando Friday night.

A critical charge call on Giannis Antetokounmpo with 1:28 left to play would have been the reigning MVP's sixth foul, but it was overturned after a replay review kept the All-Star in the game and heading to the free throw line instead.

Marcus Smart picked up his first and only foul of the night, after Antetokounmpo's layup counted and he followed that up with a made free throw, giving the Bucks a 110-107 lead and they never looked back the rest of the way.

Antetokounmpo finished with a game-high 36 points, 15 rebounds and seven assists, as Milwaukee nearly had to try and pull out a victory without their franchise player down the stretch after Smart slid in front of the Bucks forward driving into the lane to score.

According to Smart, the explanation from the referees who reversed the offensive foul call on Antetokounmpo, was that he was too late and both of his feet were not set.


"Quite frankly, I think we know all what that was all about. Giannis' sixth foul and they didn't want to get him out," said Smart, who led the Celtics with 23 points off the bench. "Let's just call that spade a spade and that's just what it is."

Antetokounmpo disagreed with Smart's assessment on the call being overturned, as the three-point swing was key for the Bucks, who snapped a three-game losing streak before the stoppage in March.


"I felt like he was moving on the last play but either way if it was a charge, if it was not a charge, I'm happy that we got the win and I'll learn from the play," Antetokounmpo said.

Khris Middleton (18 points, eight assists) hit a 3-pointer in the next Bucks' possession giving Milwaukee a six-point advantage with 1:03 left.

Jaylen Brown (22 points) on the other end got fouled by Brook Lopez (14 points) while hitting a bank shot and sank the free throw to get the Celtics within three, but that was the closest as they would get in the final seconds.

Despite a 2-of-18 shooting night for All-Star Jayson Tatum, being down 17-2 to open up the first quarter and Kemba Walker (16 points, 3-6 from behind the arc) limited to playing only 19 minutes, the Celtics nearly pulled off another double-digit comeback against the Bucks.

Milwaukee, who shot 46.4 percent for the night, improved to 54-12 and are one win away from officially clinching the No. 1 seed in the Eastern Conference, while Boston who shot 40.7 percent from the floor fall to 43-22 on the season.

The Celtics will look to bounce back when they face the Portland Trail Blazers (30-37) on Sunday afternoon.

Boston out-rebounded the Bucks 57-55, especially on the offensive glass 14-7 and both teams reached the free throw line 34 times -- Milwaukee (28) hit one more from the charity stripe than the Celtics (27).