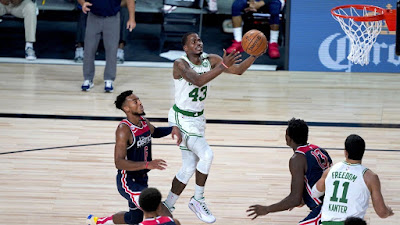 The Celtics came in winners of four in a row before falling to the Washington Wizards 96-90 to wrap up their seeding games.

Boston concludes their regular season with the third best record in the Eastern Conference of 48-24 (5-3 in the 'bubble'), while the Wizards, who picked up their only win in the NBA restart on Thursday, clinched another losing campaign at 25-47.

Javonte Green took advantage of playing starter minutes, as the rookie scored a career-high 23 points on 8-of-17 shooting.


"He played with great intensity on both ends of the floor, was trying to do all the right stuff and obviously made a big impact offensively and did some really good things on the glass," Celtics coach Brad Stevens said.

Semi Ojeleye added 13 points and eight rebounds, being the only other Celtics player to score in double-figures in the seeding finale.

Thomas Bryant led all scorers with 26 points and nine rebounds, while Troy Brown Jr. chipped in 17 points and grabbed eight rebounds for the Wizards, who avoided being the only winless team in Orlando and snapped a seven game losing streak.

While both teams shot well under 40-percent from the field, Washington lead 78-77 to start the fourth quarter and held the Celtics to only 13 points on 22-percent shooting in the final 12 minutes to secure the victory.

The Celtics will look to begin their series against the Sixers, with Game 1 tipping-off either on Monday or Tuesday night.