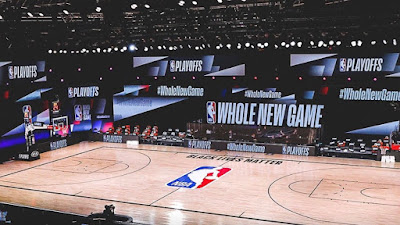 Game 1 of the Celtics-Raptors second-round series has been officially postponed, the league announced.

The NBA playoffs will apparently continue, just not on Thursday night and possibly not until this weekend.


"NBA playoff games for today will not be played as scheduled," the league said in a statement. "We are hopeful to resume games either Friday or Saturday."


ESPN's Adrian Wojnarowski reported that the players in the Orlando bubble decided to resume the postseason, but all three Thursday games were postponed following their meeting earlier in the day.

According to Gary Washburn of the Boston Globe, Game 1 of the Celtics-Raptors second round series will be played at some point on Sunday.


Other than the Celtics and Raptors, the Denver Nuggets, Utah Jazz, Los Angeles Clippers, and Dallas Mavericks were also scheduled to compete on Thursday.

The postponement of today's playoff games comes 24 hours after the Milwaukee Bucks decided to boycott Game 5 of their first-round series against the Orlando Magic, which prompted the league to postponed the three games scheduled for Wednesday.

Prior to the Bucks' deciding not to play, the Celtics and Raptors had engaged in discussions about possibly sitting out their game following the shooting of Jacob Blake, a 29-year-old Black man who was shot seven times in the back by police in Kenosha, Wisconsin.


"Obviously, if we sit out a game or the rest of the playoffs, we understand how big of an impact that will have," Jayson Tatum said Wednesday. "Everybody's going to have to talk about it. We don't want to just keep playing and forget about what's going on in the outside world because it's affecting us. It's affecting everybody."

No Celtics player or even coach Brad Stevens have spoken to the media since all games were postponed on Wednesday and the team has yet to issue a statement either.


In solidarity with our players and NBA family. pic.twitter.com/Vu66Ti0ZwV
— Boston Celtics (@celtics) August 27, 2020


There is a meeting scheduled to discuss the next steps later today, as NBA players, team governors representing the 13 teams in Orlando; representatives from the National Basketball Players Association; the league office and NBA Labors Relations committee chairman Michael Jordan will all be on the video conference call.