Why Jayson Tatum is proving his 'superstar' status 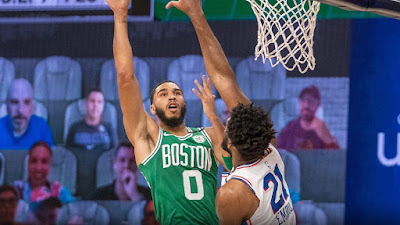 For those who had their reservations on whether Jayson Tatum was a superstar or not prior to the NBA shutdown, after what he's done to the Philadelphia 76ers so far in the playoffs should help clear any remaining doubts that this 22-year old Celtics forward has arrived.

In Game 1 of this first round best-of-7 series, Tatum notched a playoff career-high in points (32) on 10-of-21 shooting and rebounds (13), only to turn around to set a new playoff high of 33 points in the Celtics' Game 2 win on Wednesday night.

The All-Star forward was a +29 in Boston's blowout win over the Sixers, hitting 12-of-20 from the field and tying a franchise record of eight made 3-pointers (Ray Allen in 2011) on just 12 attempts. Tatum also became the youngest Celtics player ever with back-to-back 30-point playoff games, with the last being Larry Bird in 1981.

While only his third year as pro, Tatum blossoming into a star and a household name shouldn't come as a surprise at this point, just ask his teammate Kemba Walker, who gets to have a front row seat and watch it firsthand.

Tatum has been the difference maker when the lights have been at their brightest on a national stage and now once again in the postseason -- where it matters most. The Celtics forward continues to grow into his superstardom with each game.


"Jayson Tatum is unbelievable, man," Enes Kanter said. "I have no words for him. This guy is just bringing so much, not just on the court, but bringing so much pure leadership. Every time he’s out there, he's having fun, he's making himself better and he's making everybody else better around him. That's what makes him really special."

Despite the media and on court attention Tatum receives these days, it's fair to say that the young veteran remains humble enough to know the importance of wanting to help his teammates win and not necessarily focused on individual accolades or performances.


"I mean, I try to go out there and be the best player I can be," Tatum said after Game 2. "I have the utmost confidence in myself and my teammates and I know it's reciprocated. I just try to figure it out. I try to figure out when I need to be more aggressive, when I need to make the right pass. I think the most important thing is I want to be that guy, I want to be able to make the big plays, whether it's scoring or making the right pass because I'm drawing attention. I think that's the first step, wanting to be that person. It takes a collective effort. We won this game tonight as a team, and we’ll continue to win as a team."

Still, Tatum's ascension is key to the Celtics' success and that's been the case in Orlando so far. Boston is 7-3 since arriving to the 'bubble' and Tatum, outside of a poor shooting night against the Milwaukee Bucks, is shooting an absurd percentage from three (50%), while averaging 24.6 points per contest.

As the Celtics have a commanding 2-0 series lead against the 76ers and Joel Embiid continues to struggle to help his team to win, if you're still asking yourself has Tatum become a superstar throughout these 2020 playoffs yet? Keep watching, he's only going to get better while changing your mind.