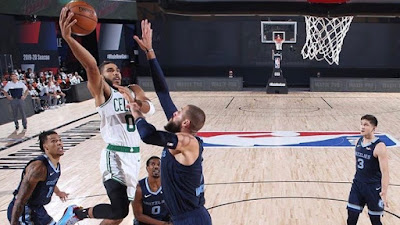 Jayson Tatum continued his impressive shooting on Tuesday night, as the Celtics beat the Memphis Grizzlies 122-107 for their fourth straight win in Orlando.

Tatum scored a game-high 29 points on 10-of-13 from the field, including going 4-of-5 from behind the arc, while Boston lead by as many as 22 points -- keeping the Grizzlies from clinching a play-in series spot for a possible playoff berth out West.

Gordon Hayward and Kemba Walker scored 19 points a piece and Marcus Smart added 11 points off the bench for the Celtics -- who are now 48-23 and have locked up the No. 3 seed in the East.

Ja Morant lead the Grizzlies with a double-double of 26 points, 13 assists and Brandon Clarke netted 15 points off the bench. Jonas Valanciunas also recorded a double-double of 14 points, 10 rebounds and Dillon Brooks chipped in 14 points for Memphis -- who are 33-39 and have lost six of seven in the NBA 'bubble.'

Boston, 5-2 in the restart, will look to wrap-up their seeding games on a high note when they face the 24-47 Washington Wizards on Thursday afternoon.

The Celtics assisted 29 times on 44 made baskets behind Smart (9), Hayward (5) and Wanamaker (4). Daniel Theis played 18 minutes against the Grizzlies despite being on the injury report with a sore foot and listed as probable prior to tip-off.