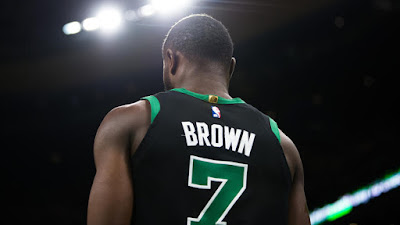 Jaylen Brown continues to demonstrate great leadership on and off the court, as he's using his platform in the fight for systemic change.

The young Celtics star has been very active since May, when he drove 15 hours to Atlanta from Boston to lead a peaceful protest against the death of George Floyd, and spoke out about the racial injustice surrounding the death of Breonna Taylor and this week's shooting of Jacob Blake.

While the Milwaukee Bucks made the decision to boycott their Game 5 against the Orlando Magic, it was the discussions between the Celtics and Raptors prior that sparked the NBA to postpone the remaining playoff games on Wednesday and Thursday.

Stephanie Ready of TNT joined the panel on NBC Sports Boston during their special "Bigger Than Basketball" Thursday night, to detail how the Celtics and Raptors essentially made the boycott come to fruition and why Brown has been looked at as of the leaders in the Orlando bubble.

"It was the Celtics and the Raptors that had that initial first team meeting, joint team meeting, when they were discussing possibly sitting out the game that was scheduled for Thursday night," Ready said. "That was what got it out in the atmosphere, and they kind of led the way. In particular, Jaylen Brown has been very vocal in these player meetings. And I've talked to a few players who have said that he has been among the leaders.

"Jaylen Brown has been very vocal in these player meetings, a few players have said he has been among the leaders."@StephanieReady explains the role Jaylen Brown is playing to help shape the NBA's social justice message from inside the bubble. pic.twitter.com/HR80Mm9iwi
— Celtics on NBC Sports Boston (@NBCSCeltics) August 28, 2020


Brown emerging as one of the key leaders in the NBA's latest action plan against social injustice should not come as a surprise. The 23-year old has expressed himself on numerous occasions since arriving on the Disney campus when it comes to the nation's issues of social inequality and police brutality.

As the NBA has agreed to resume the postseason on Saturday, with the stipulation that more has to be done in the fight for systemic change, Brown and others have made it clear that they will not "shut and dribble" and instead face the important topics to keep them at forefront.


The Celtics - Raptors Game 1 of the second-round series, which was postponed, will tip-off on Sunday at 1 pm EST.