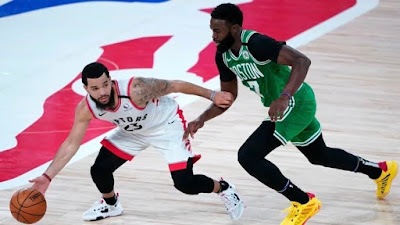 The Celtics and Raptors have engaged and continue to discuss the possibility of boycotting Game 1 of their second round series, which is scheduled to tip-off Thursday night.


"Obviously, if we sit out a game or the rest of the playoffs, we understand how big of an impact that will have," Jayson Tatum said Wednesday. "Everybody's going to have to talk about it. We don't want to just keep playing and forget about what's going on in the outside world because it's affecting us. It's affecting everybody."

Players on both teams have been upset and vocal following Jacob Blake being shot this past Sunday. A video captured by a neighbor, which has since gone viral -- showed an officer shooting an unarmed Blake, 29, in the back seven times as he tried to get into a vehicle in which his three children were in the back seat.

The shooting has left Blake paralyzed and caused social unrest in Kenosha, Wisconsin.


"Just knowing that his kids, they'll be traumatized the rest of their lives, seeing their dad get shot for no reason," Tatum said. "I couldn't even imagine how that's going to affect them for the rest of their life. There’s a lot of things that are way more important than what we’re doing on the court."

According to Tatum, the Celtics and Raptors are "trying to figure out today" if they will play Game 1. Players from both teams met Tuesday evening to discuss possible courses of action and also plan to do so again at some point on Wednesday.

Ultimately the decision will fall on each individual player and "nobody's going to be judged one way or another," Tatum said. Celtics coach Brad Stevens was asked what he wanted to happen on Thursday, Stevens replied, "It's not up to me."

Stevens understands the power his players and others around the league have when it comes to using their platform.


"I do think the idea of being able to empower, spread joy, share joy through a team sport and have an opportunity to be in front of microphones and speak on whatever you want to speak on is really powerful, but that may not be enough for some people, and that’s OK," said Stevens on Tuesday. "These are hard times and, with a pandemic going on and just this constant wave of inequality, it;s just maddening. So I completely understand anybody's stance on it."

Since teams arrived in Orlando for the restart of the NBA season, players have kept social justice issues at the forefront by wearing pre-approved messages on their jerseys, taking a knee during the national anthem and demanding justice for Breonna Taylor, a 26-year old Black woman who was killed inside her apartment by police officers in Louisville, Kentucky.

Marcus Smart spoke about how a boycott could be another way to get the message across about systemic change.


"We tried to be peaceful, kneeling, we tried to protest. And for us, we tried to come out here and get together and play this game and try to get our voice across," said Smart on Tuesday. "But it's not working, so obviously something has to be done. Right now, our focus shouldn't really be on basketball. I understand it's the playoffs and everything like that, but we still have a bigger underlying issue that’s going on and the things that we've tried haven't been working, so we definitely need to take a different approach and we definitely need to try new things out to get this thing working the way that we know it should and get our voices heard even more."

ESPN insider Adrian Wojnarowski reported late Wednesday afternoon, that all playoff games would be rescheduled, after the Milwaukee Bucks made the decision to boycott their Game 5 against the Orlando Magic. Every player in the bubble has been invited to an 8 pm meeting to discuss how they'll proceed from the day's boycotts.


"How many points you score and games you win, that shit don't matter right now," said Tatum. "Being a Black man in America is more important than what I'm doing out there on the basketball court."