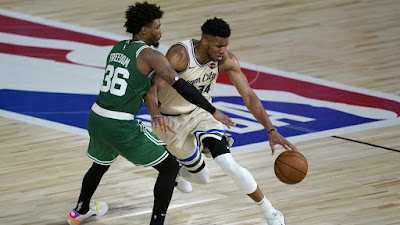 Marcus Smart finds himself in the middle of another controversial call that a referee made, but this time it was one that was overturned.

However, Smart's play on the court may have been overshadowed by a critical charge call on Giannis Antetokounmpo that got overturned with 1:28 left in the fourth quarter.

With the game tied 107-107, Smart slid in front of driving Antetokounmpo as he scored and an offensive foul was called. That would have been the Bucks All-Star's sixth foul, but a replay review overturned the call -- counting the basket and sending Antetokoumpo to the free throw line instead.

The three-point swing turned into a six-point Bucks advantage in mere seconds after a Khris Middleton 3-pointer on the very next Milwaukee possession, giving them all the momentum.


Though the Celtics would get within three, that was as close as they'd come the rest of the way, as the Bucks got a win.

Smart, who is never one to mine words, blasted the officials in his post game media video conference, stating that the league MVP was saved from picking up his sixth foul and exiting the game.


"The excuse was I was late on the charge," Smart said. "They said the replay center said I was late and it was a block. Quite frankly I think we all know what was about. Giannis (would have had) six fouls and they didn't want to get him out. Let's call a spade, a spade and that's just what it is."

Antetokounmpo decided to respond by praising Smart instead of getting into a back and forth with the Celtics guard, but the Bucks forward did disagree with the original charge call.


Here's Giannis' answer when he was asked about Marcus Smart saying the overturned charge call was an excuse to keep Giannis in the game: pic.twitter.com/epnWJcg9nT
— John Karalis 🇬🇷 (@RedsArmy_John) August 1, 2020


From another angle, it suggest that Smart's left foot may not have been set. You be the judge of the below video.


Either way, the NBA released an explanation on a "hostile act" non foul call on Antetokounmpo earlier in the fourth quarter that got overturned and would have also given him his sixth foul prior to the eventual blocking foul on Smart.


Pool report on why the review of the hostile act on Giannis was not called his sixth foul. pic.twitter.com/PomP1CzOC8
— Chris Mannix (@SIChrisMannix) August 1, 2020