Brad Stevens on the Celtics bench in Game 2: 'I couldn't take them out' 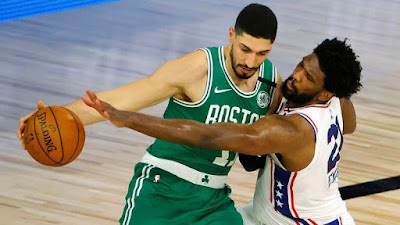 When news broke that Gordon Hayward would be out approximately four weeks with a Grade III right ankle sprain, many wondered who off the Celtics bench would step up.

Which ever player or players anyone had in mind was the right answer after Brad Stevens decided to hand the keys over to his second unit in Boston's 27-point blowout victory versus the 76ers on Wednesday night and it paid dividends.

While Marcus Smart slipped into the starting lineup for the injured Hayward and Jayson Tatum was shooting lights out from 3 to begin Game 2, Stevens elected to leave his All-Star on the floor and insert Brad Wanamaker, Romeo Langford, Grant Williams and Enes Kanter -- an interesting combo to say the least with Tatum being the only starter.

The lineup not only erased a seven point deficit for the Celtics to start the second quarter, but also turned it into a 13-point turnaround and the Sixers never led again the rest of the way.


"Our bench really took a game that was not going our way and changed it," Stevens said after the game. "I just thought it was much tougher as far as every possession was more challenged. I never would have thought we would stay with that group in the second quarter that long, but to their credit I couldn't take them out."

According to Cleaning The Glass, Stevens had used this lineup before, as they have played 26 possessions together during the regular season and the group was a +14 in very limited time.

The lineup made the difference in the game due to the defense being played by Langford keeping up with Philadelphia's shooters on the perimeter, Kanter matching Joel Embiid's physicality in and outside the paint, leading Tatum to roam free and hit big shots on the other end. What kept the lineup in longer than anticipated was the offense of Williams and Kanter hitting 3's and Wanamaker staying aggressive by getting to the rim.


"Grant's couple of 3's were big in that group," Stevens said. "Kanter had a huge 3 at the end of the shot clock but also tons of rebounds and played well, and then Romeo just did his job. Romeo has really improved in that regard. Credit all of them. When you're playing around really good scorers you just need to play your role really well and be a superstar in your role."

Williams, who seemed like he had fallen out of Stevens' rotation as the playoffs were approaching, took advantage of his name being called and delivered despite being a rookie that might have felt like he wouldn't get a chance to contribute in the postseason.


"Brad is a phenomenal coach and it's all about what you can control," Williams said after scoring 9 points and grabbing 6 rebounds in 21 minutes. "During that time, my whole thought process with Brandon Bailey was just continuing to improve, continue to work. I was just ready for my moment and I prepared for whatever was thrown at me. I was just prepared and tried to do the job that my team needs me to do, not try to go outside my means or be someone I'm not."

Though the Celtics second unit hasn't always looked sharp this season, coach Stevens continues to preach 'the next guy approach' and his bench not only overcame the loss of Hayward in the lineup, but they scored 41 points in Game 2 to boot after scoring just eight in Game 1 on Monday night.


"We don’t worry about anything else but just us. Coach trusts the bench so we just go out there and try to do our job," said Enes Kanter, who put up 10 points and 9 rebounds. "I think we have great leaders like Brad (Wanamaker) and just whoever, like today Romeo and Grant did an amazing job coming in and just playing a high-level playoff game. I think the bench is always ready, going out there, having fun, playing smart and just doing our job and giving 100-percent."

The Celtics have a 2-0 series lead as they prepare for Game 3 against the Sixers, though the question that now remains is can the second unit keep this up, as Boston has all the momentum heading into Friday night? Only time will tell.