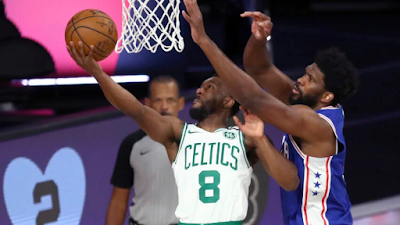 All-Star guard Kemba Walker is heading to the second round of the NBA playoffs for the first time in his nine year career, as the Celtics completed a four-game sweep of the Philadelphia 76ers with a 110-106 win on Sunday.

Walker scored a game-high 32 points on 8-of-15 shooting, including going 4-of-9 from 3, while Jayson Tatum went 10-of-18 for 28 points to go along with 15 rebounds to help the Celtics advance the Eastern Conference Semifinals.


"This is the reason I came to Boston -- to be able to play in the playoffs and advance, play high-level basketball," said Walker. "So it feels good."

Jaylen Brown added 16 points and Daniel Theis netted 15 points for Boston, who will face the winner of the Brooklyn Nets and Toronto Raptors first round matchup.

Joel Embiid led the 76ers with 30 points and 10 rebounds, marking it his fourth straight double-double and his third straight game with at least 30 and 10 in the series. Tobias Harris added 20 points and five rebounds despite having to leave briefly after a scary fall that caused a cut over his left eye.

With 2:40 left in the third quarter, Harris was trying to contest a shot by Tatum and inadvertently had his legs taken out from under him by the Celtics forward. Harris fell on the left side of his face and was somewhat motionless on the court for several minutes while the medical staff attended to him.

Harris was able to get to his feet on his own and head to the locker room with a towel over his eye. The Sixers said he suffered a left eye laceration and was cleared of a possible concussion. He returned to the bench and checked back into the game with 5:12 left to play, sporting a bandage over his left eye.

Josh Richardson chipped in 14 points and Al Horford recorded his first double-double of the series with 12 points and 10 rebounds. The 76ers attempted 19 free throws in the first quarter and went on 11-0 run to end the period and take a 32-27 lead and a one point advantage at halftime.

Celtics scored nine straight points as part of 12-0 run to end the third while Harris was out, before pushing their lead to 96-79 in the opening minutes of the final frame -- their largest of the afternoon.

Despite the 76ers cutting the deficit to single digits late in the fourth, the Celtics never gave up their lead, marking this as the first series sweep between these two franchises in 15 postseason meetings.

If the Raptors beat the Nets in Game 4 tonight, the Celtics and Toronto will more than likely tip-off their second round matchup on Thursday.