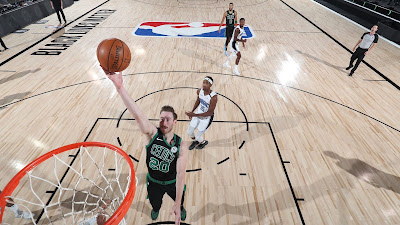 Gordon Hayward and Jayson Tatum made sure to force overtime then both took over, as the Celtics squeaked out a 122-119 win over the Orlando on Sunday.

Hayward hit three free throws with 2:29 left to play in overtime to give Boston their first lead of 115-114 in the extra period, on his way to a game-high 31 points.


"I think that our team is at our best when I'm aggressive and attacking," Hayward said. "It opens the court for everyone else. A lot of times when I'm attacking it doesn't necessarily end up in me scoring, but it can be a pass or an extra or something else."

The Celtics forward scored 18 in the first half and finished with 12-of-18 overall shooting from the field, to go along with nine rebounds and five assists.

Jayson Tatum (nine rebounds, six assists) finished with 29 points, including hitting the game-tying basket with 4.2 seconds left in the fourth quarter. Jaylen Brown notched a double-double of 19 points and 12 rebounds, while Brad Wanamaker added 10 points off the bench in the Celtics' third straight win.

Boston, 47-23 on the season, have essentially locked up the No. 3 seed and are 4-2 in the NBA 'bubble' with two games remaining.

Orlando, who were without Aaron Gordon (hamstring) and Evan Fournier (illness), clinched a playoff berth despite losing three in a row, were led by Nikola Vucevic's 26 points and 11 rebounds. Terrance Ross netted 18 points, while Markelle Fultz chipped in 16 points and 10 assists for the 32-39 Magic.

In a back and forth first half, where no team led by more than eight points, the Celtics took a 55-51 advantage into intermission and a 87-86 lead into the final frame.

The Magic seemed like they had the game won after a five point lead with just under 49 seconds left in regulation. Following a Vucevic made 10-footer, Tatum hit a 3 to cut the Celtics deficit down to two and Daniel Theis (six points, seven rebounds) blocked (three) a shot attempt by D.J. Augustin (12 points, five assists), which set up Tatum's mid-range basket to tie it at 112 apiece.

Vucevic had a last chance to force another overtime, but missed a 3-pointer at the top of the key as time expired, having the Magic fall to 0-3 on the season against Boston.

The Celtics will look to make it four wins in a row when they face the Memphis Grizzlies (33-38) on Tuesday night.

Kemba Walker scored four points on 1-of-9 shooting, handed out six assists and grabbed three rebounds in 32 minutes of action - the most he's played in the six seeding games so far. Marcus Smart, who ran the point guard position with Walker on the bench, scored eight points and finished with nine assists. The Celtics outscored the Magic in the paint 56-42, while Boston also dished out 32 assists on 45 made shots.